If you’re wandering Los Angeles, you might encounter the name “Mark Ridley-Thomas” on a pedestrian bridge spanning La Cienega Boulevard.

His name has also decorated a new wellness center, a high school health center, a youth facility, and a “constituent service center” with government offices.

Then there’s the Mark Ridley-Thomas Behavioral Health Center at the MLK medical campus. And the Natural History Museum of Los Angeles County has been planning to break ground on a new commons — one slated to feature an entrance plaza named for Ridley-Thomas.

Now his name has been spelled out in a federal grand jury indictment accusing Ridley-Thomas, currently a Los Angeles City Council member, of taking bribes from a USC dean while he was serving on the county Board of Supervisors.

His attorney said Ridley-Thomas was shocked by the claims. “They are wrong, and we look forward to disproving them,” Michael J. Proctor said in a statement. “At no point in his career as an elected official — not as a member of the City Council, the state Legislature, or the Board of Supervisors — has he abused his position for personal gain.” Proctor urged people “to allow due process to take its course.”

A man walks by the Avis and Mark Ridley-Thomas Wellness Center on the Charles R. Drew University in Los Angeles.

Ridley-Thomas has not been convicted of the alleged crimes, but the federal charges have nonetheless cast a shadow over the many sites named after the longtime politician, who was first elected to the L.A. City Council in 1991 and held state and county office before returning to the City Council in December.

The Natural History Museums of Los Angeles County organization, responding to questions about its naming plans, said in a statement Thursday that “given the federal grand jury indictment” of Ridley-Thomas, “we are working to determine appropriate next steps.”

Naming buildings and landmarks for elected officials is a familiar practice in Los Angeles and across the country, but it has long drawn complaints from critics who argue it is inappropriate and risky when honoring people still actively involved in politics.

In Florida, one commissioner even proposed banning such names for publicly funded structures. Political consultant Dermot Givens, who is not currently representing any L.A. city candidates, excoriated the practice. 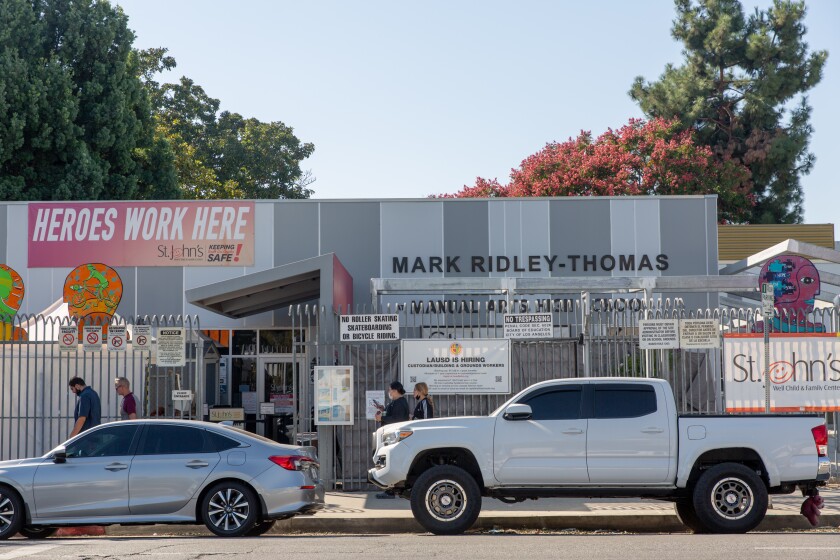 “I absolutely hate it,” Givens said. “It’s the height of ego and it should be barred.

“If you’re that loved and honored, after you’re dead somebody can name something for you,” Givens said.

With City Hall mired in corruption scandals, this isn’t the first time Los Angeles has grappled with a site being named for a politician facing a federal indictment.

Ridley-Thomas is the third member of the L.A. City Council in recent years to face federal corruption charges, following council members Mitchell Englander and Jose Huizar. When Englander was headed to prison, the Los Angeles Daily News reported that a planned park in Porter Ranch might not be ultimately named for his family members, as previously intended. The planned “Bloom Park” was also slated to have an “Englander Pavilion.”

The Porter Ranch park isn’t expected to open until next fall at the earliest, said Grace Yao, spokesperson for Los Angeles City Councilman John Lee, who now represents the area. Yao said that Lee will work with the parks department “to ensure that there is extensive outreach to community members and that their input is taken into consideration when deciding on a name for the park and the pavilion.” 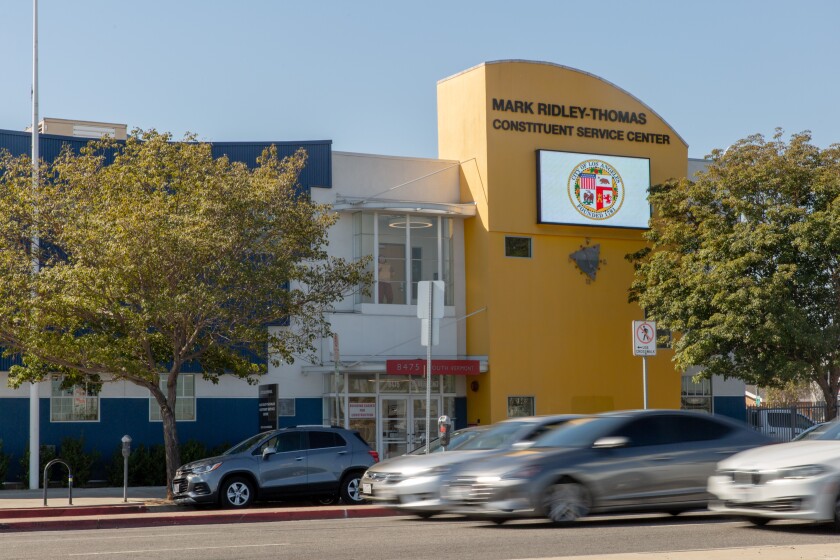 Naming things is “one of many ways that we acknowledge some of the heroes in our country and pay tribute to who they were and what they stood for,” said Miriam Krinsky, a former federal prosecutor and former president of the L.A. City Ethics Commission.

But the risk of doing so while a person is still in “the political limelight” is that it can be seen as a political endorsement or favor, Krinsky said.

Even if no charges or scandals emerge, when something is named for a politician who is still serving, there’s “the concern about what kind of influence led to that naming,” said Laurie Levenson, a professor at Loyola Law School.

“It’s probably safest to wait to see what someone’s overall legacy is,” Levenson said. “It’s too bad that we have to do so.”

Ridley-Thomas became the namesake for many sites while he was an active player in Los Angeles politics, known as a prominent figure in local efforts to address homelessness. It was just two months ago that he announced that he would not run for mayor.

At an event last month celebrating the Avis & Mark Ridley-Thomas Wellness Center, someone asked jokingly if such a naming meant career “twilight,” the Daily News reported. The paper reported that Ridley-Thomas replied: “There is a fourth quarter and I fully intend to embrace it with all the gusto that is resident in my being.”

Givens argued it is dicey to name things after politicians not just while they remain in office, but even while they remain alive. But Erwin Chemerinsky, dean of the UC Berkeley School of Law, countered that it is “a wonderful honor to name something for a living person so they can enjoy the recognition.”

“There always is a danger that something could happen to tarnish the person and require a change,” Chemerinsky said. “But that can happen after someone is dead too.”

Chemerinsky also stressed that Ridley-Thomas “has not been convicted of anything yet.”

L.A. City Councilman Marqueece Harris-Dawson, who has a field office in the Mark Ridley-Thomas Constituent Service Center on Vermont Avenue, said “it would be punitive to change the name of the Constituent Center” at this time. No resident in his district has called for it, he added.

“There is a process that happens when allegations are made,” Harris-Dawson said. “And we will see that process through.”