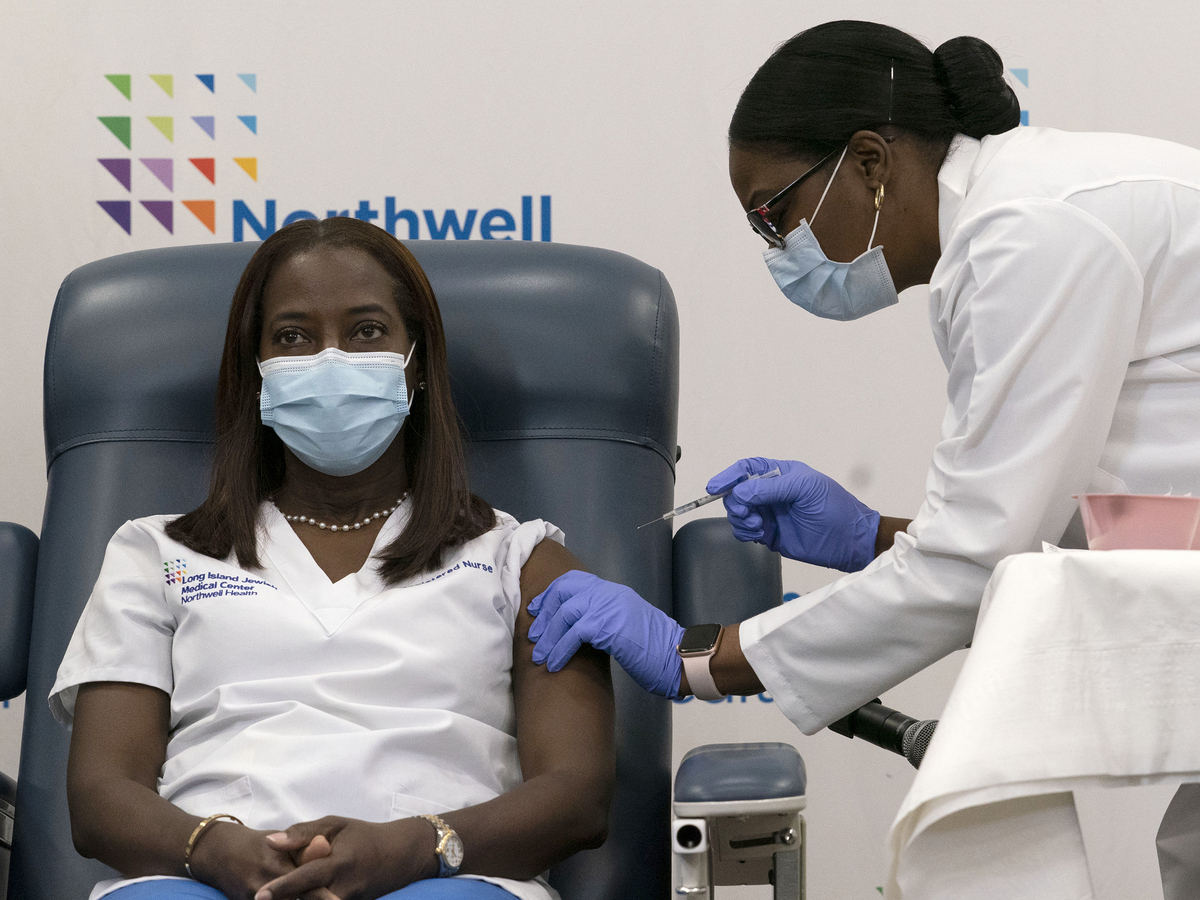 The first people in the U.S. are receiving vaccination shots against COVID-19 on Monday, as U.S. health workers started administering the vaccine developed by Pfizer and BioNTech.

The first widely publicized vaccination took place in New York City, shortly after 9 a.m. ET. The event was live-streamed and promoted by New York Gov. Andrew Cuomo, who said, “The vaccine only works if the American people take it.”

Sandra Lindsay, a critical care nurse at Long Island Jewish Medical Center, was the first person to receive the vaccine at the event. She received a shot administered by Dr. Michelle Chester, director of employee health services at Northwell Health.

“I feel like healing is coming,” she said. “I hope this marks the beginning to the end of a very painful time in our history.”

After the shot was complete, applause broke out at the Long Island medical center — and Lindsay joined in.

“I am feeling great,” she said in the moments before getting the vaccine.

The vaccine is historic, developed just months after the coronavirus became a public health threat. But Lindsay said the shot was like any other she has received.

“It didn’t feel any different from taking any other vaccine,” she said, adding that it was a relief to get the shot, after months of helping patients stricken with the disease.

Lindsay also thanked all of her colleagues on the front lines of the battle against COVID-19. And she urged others to take the vaccine, saying she places her trust in science.

The vaccine’s arrival is a rare bright spot in the fight against a viral disease that has now killed nearly 300,000 people in the U.S. and more than 1.6 million people worldwide.

“I was watching the coverage this weekend along with Americans everywhere, and it brought tears to my eyes,” Whitmer said, describing footage of trucks shipping out the first vaccine doses to hospitals and clinics across the country. Pharmacists Richard Emery and Karen Nolan wheel a box containing the Pfizer-BioNTech COVID-19 vaccine next to a storage freezer as it arrives at Rhode Island Hospital in Providence, R.I, on Monday. 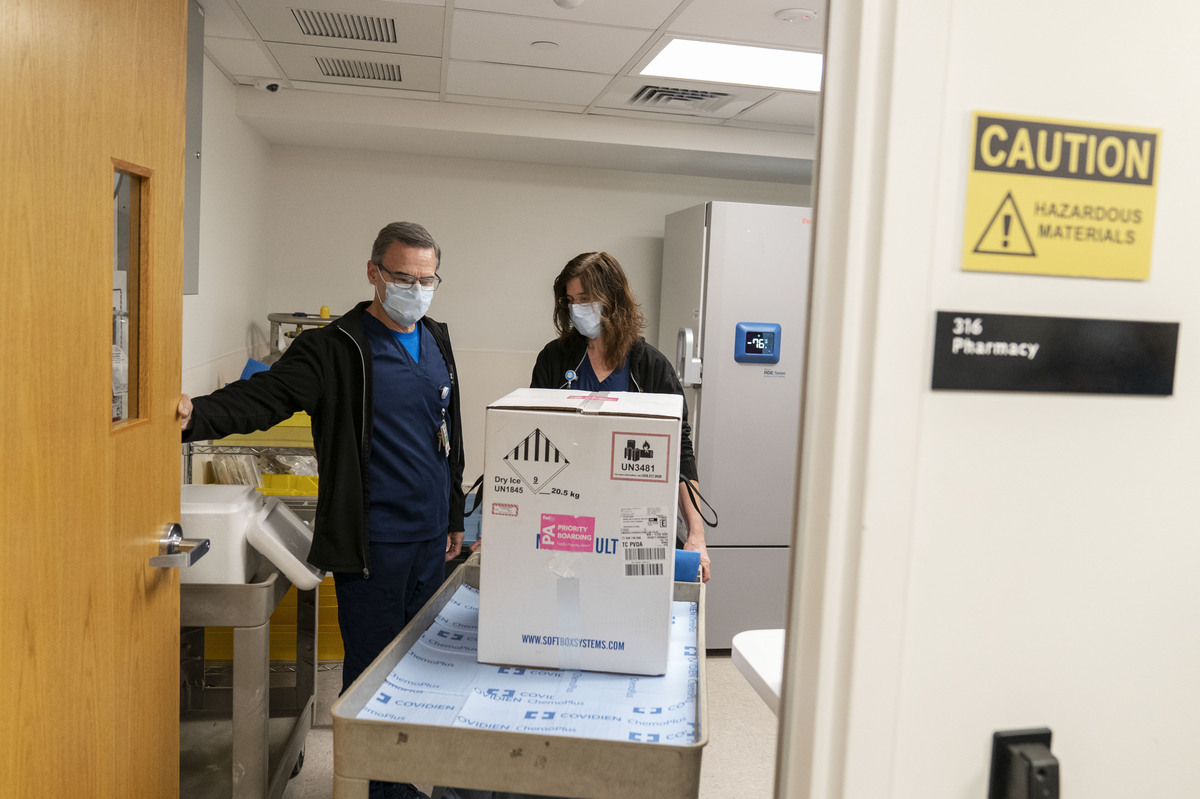 Pharmacists Richard Emery and Karen Nolan wheel a box containing the Pfizer-BioNTech COVID-19 vaccine next to a storage freezer as it arrives at Rhode Island Hospital in Providence, R.I, on Monday.

“This is a game changer,” Florida Gov. Ron DeSantis said, after waiting at a hospital loading dock to see the vaccine arrive and be unloaded.

Florida’s shipment will be enough for nearly 100,000 vaccine doses, the governor said.

“This is an historic occasion,” Ohio Gov. Mike DeWine said, tweeting a video showing him greeting a UPS truck at the Ohio State University Wexner Medical Center. He later shared an image of the first health care workers getting their shots.

“About 145 sites are expecting to receive a vaccine shipment today,” NPR’s Allison Aubrey reports, adding that another 425 sites will get their doses on Tuesday.

Other vaccines are in the works, bolstering hopes of an eventual return to normal. But experts warn that it will take time to reverse a pandemic that is soaring to new heights in the U.S. and other countries.

States are using tiered systems to determine who gets the first doses in what is a very limited number of vaccines. They must also adapt to shifting plans from Operation Warp Speed, the Trump administration’s vaccine program.

“We were anticipating about a half a million vaccines and then we were informed by the federal government that it was going to be more like 80,000,” Whitmer says. “And so we as states are trying to be nimble and build up the apparatus to administer these vaccines.”

Because the Pfizer vaccine requires two doses, Michigan’s allotment translates to 40,000 vaccinated people. Federal officials say vaccine distribution will ramp up in the coming months, as they plan to carry out tens of millions of vaccinations between now and early 2021.

The first vaccine doses are earmarked for the elderly, front-line workers and people with health conditions that increase their risk.

It will be at least a couple months, Whitmer said, before “we will really start to see increased availability for the general public.”