A makeshift memorial for the dozens of Indigenous children who died more than a century ago while attending a boarding school that was once located nearby is displayed under a tree at a public park in Albuquerque, N.M., in 2021. 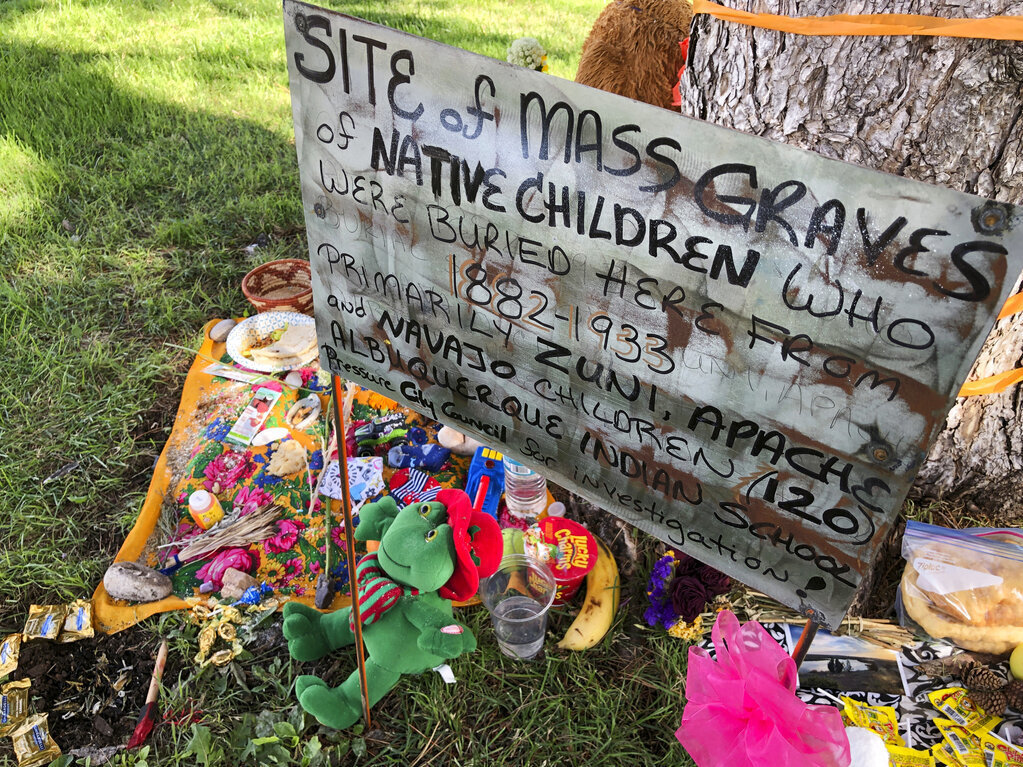 A makeshift memorial for the dozens of Indigenous children who died more than a century ago while attending a boarding school that was once located nearby is displayed under a tree at a public park in Albuquerque, N.M., in 2021.

FLAGSTAFF, Ariz. — A first-of-its-kind federal study of Native American boarding schools that for over a century sought to assimilate Indigenous children into white society has identified more than 400 such schools that were supported by the U.S. government and more than 50 associated burial sites, a figure that could grow exponentially as research continues.

The report released Wednesday by the Interior Department expands the number of schools that were known to have operated for 150 years, starting in the early 19th century and coinciding with the removal of many tribes from their ancestral lands.

The dark history of the boarding schools — where children who were taken from their families were prohibited from speaking their Native American languages and often abused — has been felt deeply across Indian Country and through generations.

Many children never returned home. The investigation has so far turned up over 500 deaths at 19 schools, though the Interior Department said that number could climb to the thousands or even tens of thousands.

“Many of those children were buried in unmarked or poorly maintained burial sites far from their Indian Tribes, Alaska Native Villages, the Native Hawaiian Community, and families, often hundreds, or even thousands, of miles away,” the report said.

A second volume of the report will cover the burial sites as well as the federal government’s financial investment in the schools and the impacts of the boarding schools on Indigenous communities, the Interior Department said.

“The consequences of federal Indian boarding school policies — including the intergenerational trauma caused by the family separation and cultural eradication inflicted upon generations of children as young as 4 years old — are heartbreaking and undeniable,” Interior Secretary Deb Haaland said in a statement.

Haaland, who is Laguna, announced an initiative last June to investigate the troubled legacy of boarding schools and uncover the truth about the government’s role in them. The 408 schools her agency identified operated in 37 states or territories, many of them in Oklahoma, Arizona and New Mexico.

The Interior Department acknowledged the number of schools identified could change as more data is gathered. The coronavirus pandemic and budget restrictions hindered some of the research over the last year, said Bryan Newland, the Interior Department’s assistant secretary for Indian Affairs.

The department has so far found at least 53 burial sites at or near the U.S. boarding schools, both marked and unmarked.

The U.S. government directly ran some of the boarding schools. Catholic, Protestant and other churches operated others with federal funding, backed by U.S. laws and policies to “civilize” Native Americans.

The Interior Department report was prompted by the discovery of hundreds of unmarked graves at former residential school sites in Canada that brought back painful memories for Indigenous communities.

“It is my priority to not only give voice to the survivors and descendants of federal Indian boarding school policies, but also to address the lasting legacies of these policies so Indigenous Peoples can continue to grow and heal,” she said.

Boarding school conditions varied across the U.S. and Canada. While some former students have reported positive experiences, children at the schools often were subjected to military-style discipline and had their long hair cut.

Tribal leaders have pressed the agency to ensure that any children’s remains that are found are properly cared for and delivered back to their tribes, if desired. The burial sites’ locations will not be released publicly to prevent them from being disturbed, Newland said.

Accounting for the whereabouts of children who died has been difficult because records weren’t always kept. Ground penetrating radar has been used in some places to search for remains.

The National Native American Boarding School Healing Coalition, which created an early inventory of the schools, has said Interior’s work will be an important step for the U.S. in reckoning with its role in the schools but noted that the agency’s authority is limited.

Later this week, a U.S. House subcommittee will hear testimony on a bill to create a truth and healing commission modeled after one in Canada. Several church groups are backing the legislation.