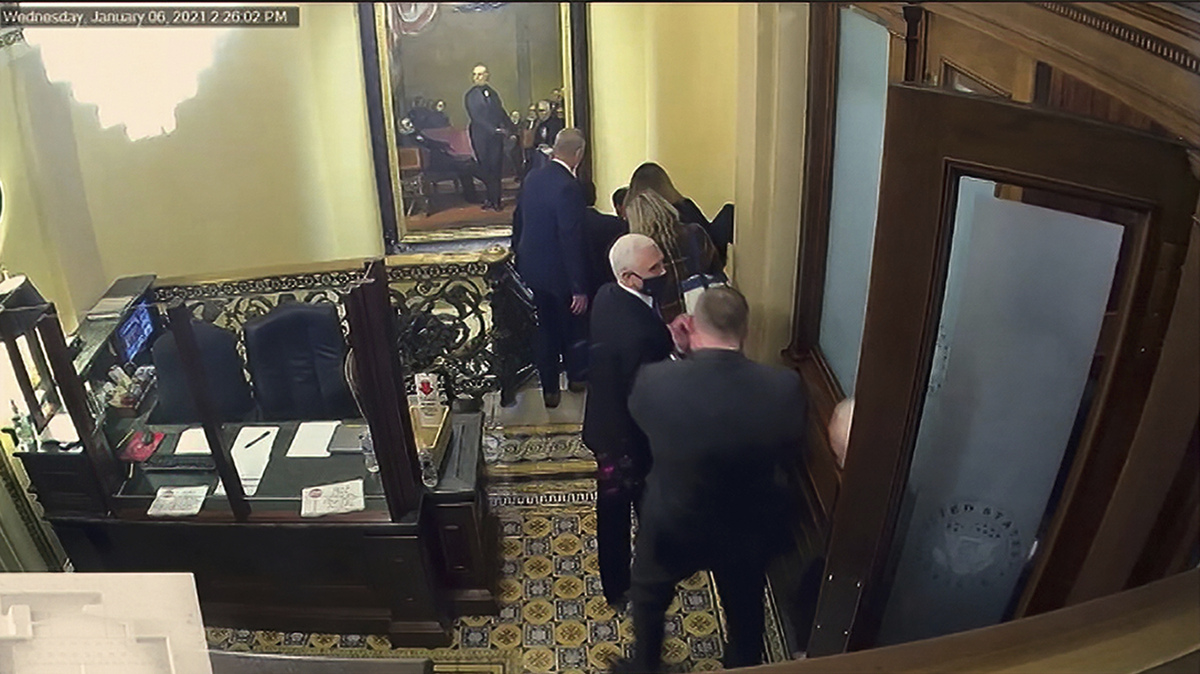 What former President Donald Trump knew of the safety of his vice president, Mike Pence, when Trump disparaged Pence during the Capitol insurrection was a key question in Day 4 of Trump’s Senate impeachment trial.

In the trial’s question-and-answer session Friday, Sen. Mitt Romney, R-Utah, asked whether Trump knew that Pence was being evacuated from the Capitol as the former president composed a tweet condemning Pence for not having the “courage” to stop then-President-elect Joe Biden’s election victory.

“When President Trump sent the disparaging tweet at 2:24 p.m., was he aware that the vice president had been removed from the Senate by the Secret Service for his safety?” Romney asked.

Pence was presiding over the Senate as it counted the electoral votes.

House Democratic managers stressed in their presentation how close a mob of Trump supporters got to Pence, and that some rioters had yelled, “Hang Mike Pence.” Managers’ reconstructed timeline of the events also included Trump’s tweets throughout Jan. 6.

Rep. Jamie Raskin, D-Md., the lead impeachment manager, was first to respond to Romney’s question. He noted the events of Jan. 6 were broadcast on live television and on the radio, saying Trump had to know that the rioters had already breached the building and were armed with weapons, and that the police were outnumbered.

“Here are the facts that are not in dispute,” Raskin said. “Donald Trump had not taken any measures to send help to the overwhelmed Capitol police. As president, when you see all of this going on and the people around you are imploring you to do something, and your vice president is there, why wouldn’t you do it?”

Raskin also noted remarks by Republican Sen. Tommy Tuberville of Alabama, who has told reporters that he spoke to Trump over the phone as the mob began ransacking the Capitol. During their brief conversation, Tuberville said he told the former president that Pence had been evacuated from the chamber moments earlier.

“Sen. Tuberville specifically said that he told the president, ‘Mr. President, they just took the vice president out, I’ve got to go,’ ” Raskin said.

Trump’s lawyers on Friday pushed back on the impeachment managers’ account.

“At no point was the president informed the vice president was in any danger,” Michael van der Veen argued, adding that there is “nothing at all in record on this point.” Van der Veen also accused the House impeachment managers of failing to do their due diligence on this issue.

“What the president did know is that there was a violent riot happening at the Capitol,” van der Veen said. “That’s why he repeatedly called via tweet and via video for the riots to stop, to be peaceful, to respect Capitol police and law enforcement and to commit no violence and go home.”

Sen. Bill Cassidy, R-La., who says he is undecided on whether he’ll vote to convict Trump, asked for more details regarding Tuberville’s account of the call with Trump and his tweet railing against Pence.

“Does this show that President Trump was tolerant of the intimidation of Vice President Pence?” Cassidy asked.

“I have a problem with the facts in the question because I have no idea,” van der Veen responded.

Cassidy told reporters later that he didn’t think his question got a good answer.