Father Oleksandr Yarmolchyk stands inside the demolished nave of his Orthodox church in Peremoha, Ukraine on April 17. He says the Russians bombed his church and held him against his will. 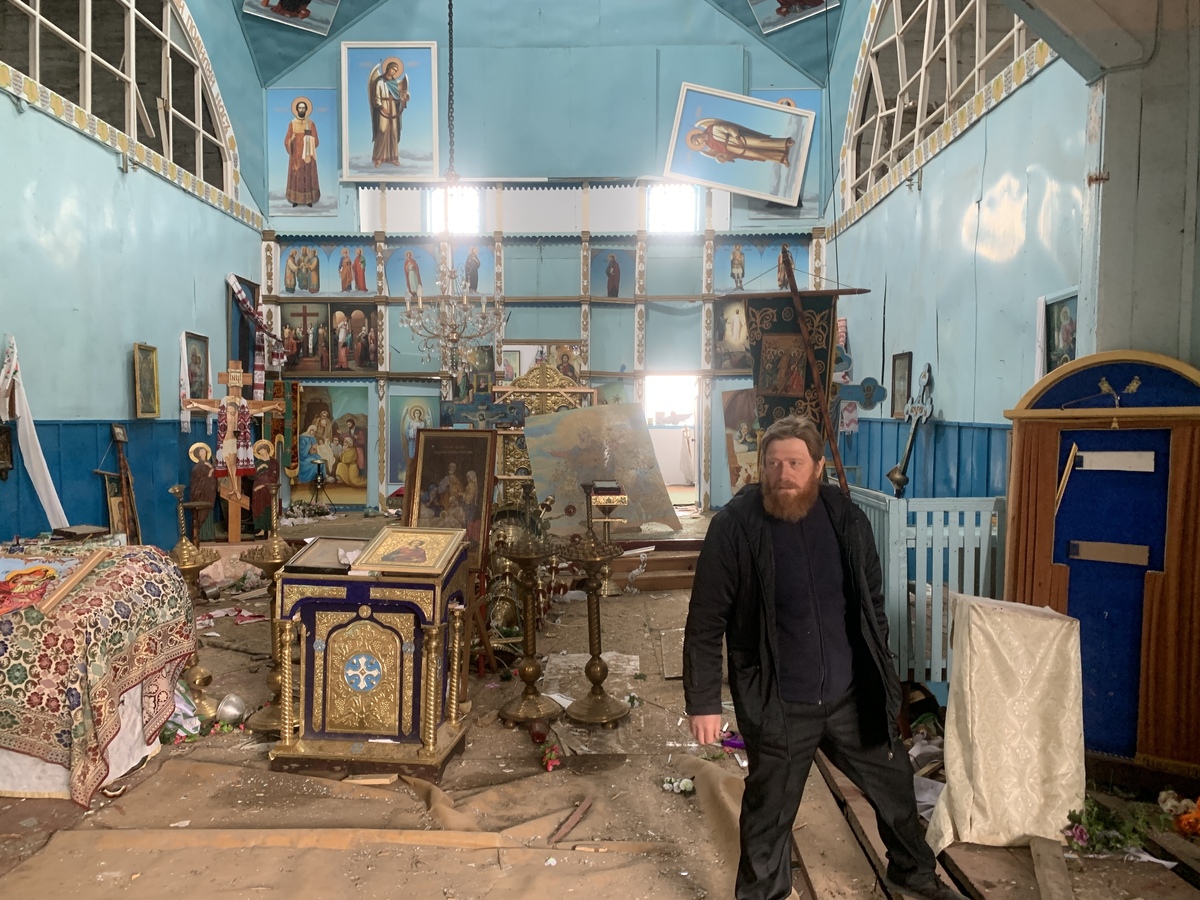 Father Oleksandr Yarmolchyk stands inside the demolished nave of his Orthodox church in Peremoha, Ukraine on April 17. He says the Russians bombed his church and held him against his will.

PEREMOHA, Ukraine — Bodies lying on the streets. Men and women found shot in basements, with their hands tied behind their backs. Mass graves.

These and images of tangled bodies found among the ransacked Ukrainian villages liberated from Russian forces have led to multiple investigations into war crimes.

Ukraine’s prosecutor general’s office has opened more than 9,300 investigations into alleged war crimes and identified hundreds of suspects from Russia.

The prosecutor general, Iryna Venediktova, says the true number of cases will be much higher, considering they have yet to access the east, where some of the most violent fighting has occurred.

“No one knows,” Venediktova tells NPR. “Doubled or in three times or in five times. Nobody can say about it. It’s a full-scale invasion to our country. Very aggressive. Very brutal.”

The path to holding Russian President Vladimir Putin criminally responsible for alleged war crimes is long and complex. Ukrainian and international experts believe it will take years, if not decades, to collect evidence, build cases and prosecute people.

But Venediktova and her team are determined to hold Putin accountable.

Venediktova has 8,000 prosecutors working for her. They’re visiting areas where displaced people are staying and taking testimonials. They are leaning on civil society groups to help lead them to the most relevant cases.

Sasha Romantsova, the executive director of one of those groups, the Kyiv-based Center for Civil Liberties, one of Ukraine’s largest human rights groups, recently traveled to Peremoha.

In this small village outside Kyiv, she and her team investigated reports of civilians being held hostage and used by Russian forces as human shields.

One of her first stops was an Orthodox church with two large holes from tank shelling big enough to walk through.

Father Oleksandr Yarmolchyk took her into the demolished nave. Broken crosses and shattered holy images littered the floor. The large crushed chandelier lay amid the rubble by the pulpit.

Yarmolchyk told Romantsova that the Russians held him in his basement. He said they wouldn’t let him leave.

“So if someone died in the village, they didn’t allow you to leave and bury them?” Romantsova asked. Sasha Romantsova, executive director of the Kyiv-based Center for Civil Liberties, visits an Orthodox church bombed by Russians in Peremoha, Ukraine, on April 17. 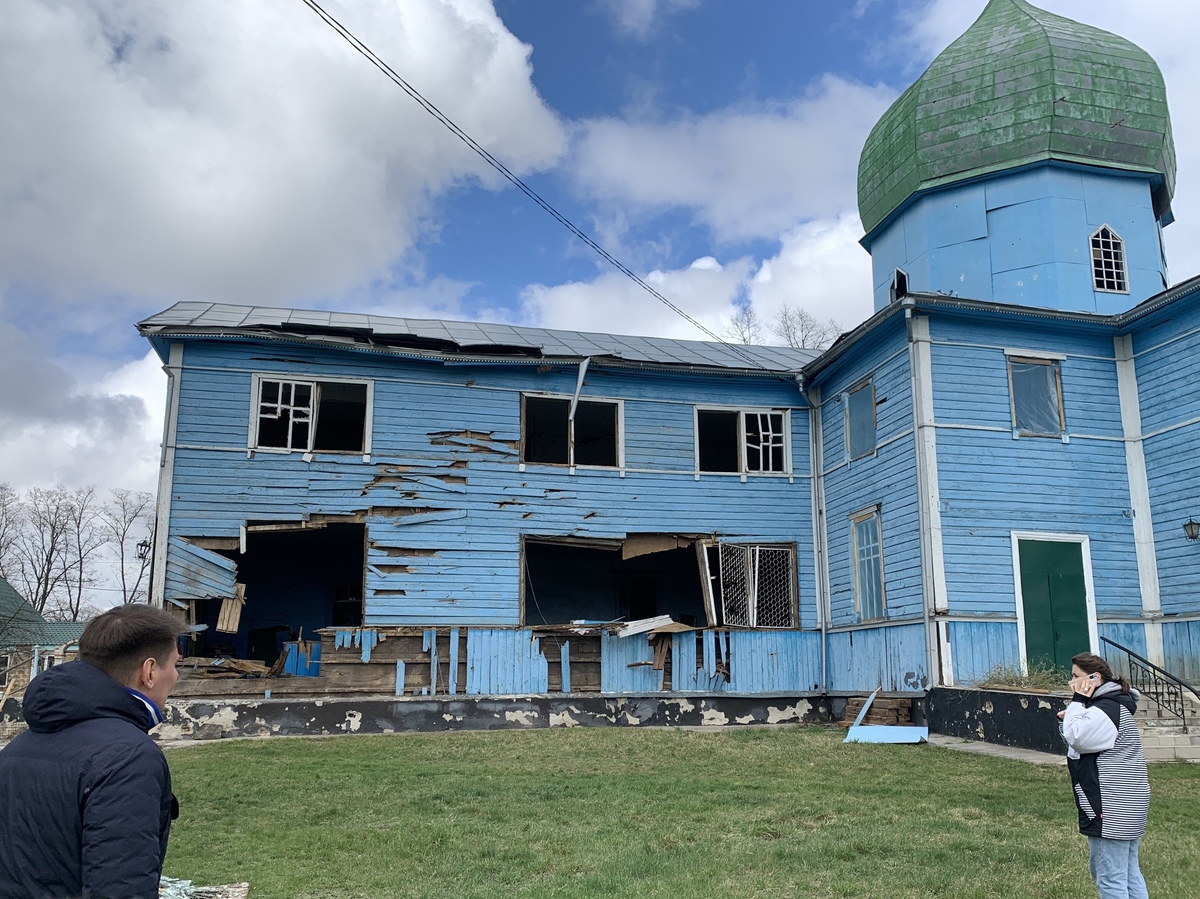 Sasha Romantsova, executive director of the Kyiv-based Center for Civil Liberties, visits an Orthodox church bombed by Russians in Peremoha, Ukraine, on April 17.

Yarmolchyk answered no and told her they also threatened his family.

“He said, ‘I needed to watch after my kids.’ I will remember how he said that, forever,” Yarmolchyk says.

Romantsova heard similar stories about the Russians setting up inside a retirement community, preventing seniors from leaving.

Oftentimes, she says, her days are filled by talking to as many people as possible, following up on leads and trying to parse out facts from rumors — or exaggerations.

She went to the Peremoha school, where the Russians built bunkers. She and her team took pictures of the flattened post office to show destroyed critical infrastructure.

She records it all, has her experts analyze the material and passes off the most valuable information to Ukrainian prosecutors for further investigation. He says it will take a lot of work and effort to pull together enough evidence that would tie Putin and other top Russian leaders individually to actions committed by their soldiers on the ground.

“Modern political and military leaders do not write down orders to kill, kill and rape innocent people,” he says. “But it doesn’t mean to say that they’re not responsible for it.”

She spends hours every day going over the images of alleged war crimes, trying to decipher what was targeted. What was indiscriminate. And she acknowledges it has had an impact.

“I do everything as a prosecutor,” she says. “And even now, you see that I try to be not emotional, but from other side, of course, I am a Ukrainian citizen. I see every day, from morning until night, that’s my country is being bloodied.”

She asks her assistant to share a picture of a teenage boy, lying on a hospital table, a greenish-gold shell in his bloodied chest.

“Now you imagine what I see,” she says. “This is the chest of the boy and the piece of projectile inside this boy.”

“What am I supposed to feel?” she asks. “Is it possible to forgive someone for this?”

Not for her, she says, and puts the picture away.

Olena Lysenko contributed to this report in Peremoha and Kyiv.