People carry groceries from a local gas station on Monday in Austin, Texas. The winter storm has brought historic cold weather to the state, causing traffic delays and millions of customers without power. 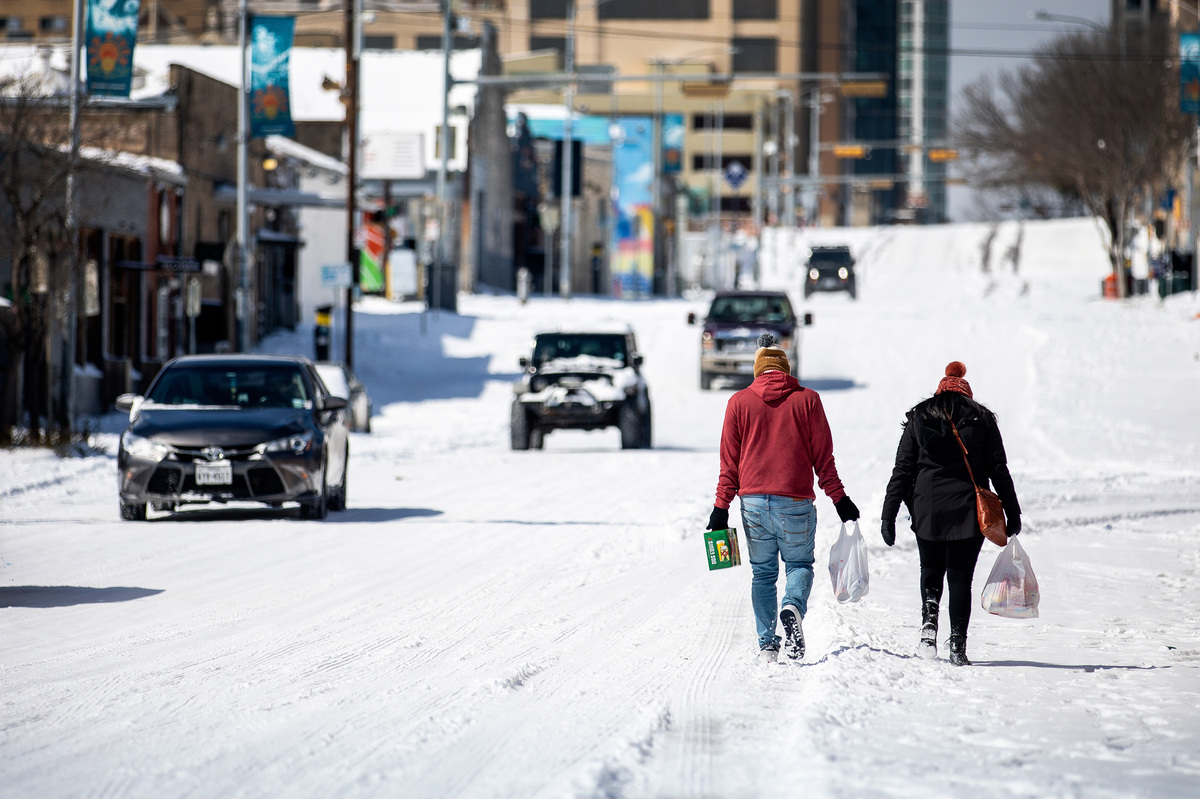 People carry groceries from a local gas station on Monday in Austin, Texas. The winter storm has brought historic cold weather to the state, causing traffic delays and millions of customers without power.

With Texans facing their second day of rotating intentional outages, Gov. Greg Abbott declared reform of the group that manages the state’s power grid to be an emergency item for the legislature to take on during its current session. An investigation is needed to prevent more such outages, Abbott said.

“The Electric Reliability Council of Texas (ERCOT) has been anything but reliable over the past 48 hours,” Abbott said. “Far too many Texans are without power and heat for their homes as our state faces freezing temperatures and severe winter weather. This is unacceptable.”

The governor said he wants to “get a full picture of what caused this problem and find long-term solutions.”

More than 4.4 million customers are currently without electricity in Texas, according to the tracking site PowerOutage.us. On the same day, many cities in Texas and neighboring states are seeing record low temperatures, such as -1 in Dallas-Fort Worth, 12 in San Antonio and 19 in Corpus Christi — erasing marks that had stood for more than 100 years.

Electricity customers across Texas have been enduring rolling blackouts since the early hours of Monday morning, after the state’s grid operator rapidly escalated an energy emergency declaration through three levels early Monday.

ERCOT, which manages power for about 90% of the state’s electric load, said severe conditions were causing problems for all types of power generators, from natural gas to wind and solar.

Bitter #cold remains across the Great Plains this morning and has spread to areas along the central and western Gulf Coast. More record lows were recorded today: pic.twitter.com/7ZPAEJIMgU

Faced with a combination of electric grid failures and bitter cold, utilities and government officials in Texas are telling people who lack power to report to warming centers.

Stunning price increases across the state

Dire messages are coming from electricity retailers who normally offer customers low prices based on daily wholesale rates. But with those rates now skyrocketing, companies are telling customers to brace for sticker shock. And at least one firm is urging its customers to switch to another provider, for at least the short term.

“Elevated prices are expected to continue till the end of the week,” the provider Griddy told customers. As that picture came into focus over the weekend, Griddy published a guide to help customers switch to another retail provider, to avoid steep price hikes.

But people who want to switch to a new energy provider might have a hard time finding one right away.

“The soonest possible start date for a new enrollment or switch is Saturday, February 20,” Cirro Energy says. Other providers, including Reliant, are citing the same date for accepting any new accounts.

In contrast to a market-rate firm such as Griddy, companies like Cirro and Reliant promise bills that aren’t as vulnerable to sudden increases due to high demand. They also let customers sign up for bills that are averaged over time, dulling price spikes and making expenses more predictable. But for now, like much of Texas, they’re overwhelmed by a blast of arctic air.

Until recently, the average price for electricity in Texas was a bit more than 12 cents per kilowatt hour (kWh), according to the U.S. Energy Information Administration. Even before the storm’s full effects were felt, Griddy warned its customers on Friday that prices rose to average around 30 cents/kWh. Things got even worse over the weekend and the holiday.

A megawatt hour is equal to 1,000 kilowatt hours. On average, a U.S. residential utility customer normally uses about 877 kWh each month, according to the EIA.

As the cost of electricity soared, Griddy advised its customers to switch.

“We want what’s right by our consumers, so we are encouraging them to leave,” Griddy CEO Michael Fallquist told Bloomberg News. “We believe that transparency and that honesty will bring them back” after the emergency passes, he added.

Utilities and power companies are also urging people to cut their energy use, asking them to set their thermostats no higher than 68 degrees and minimize their use of appliances. They’re also asking people to close their shades and blinds, to reduce heat loss through windows.

The rotating blackouts include “customers who had power restored previously” during the winter storm, says Garland Power & Light, northeast of Dallas.

Within service areas, the blackouts aren’t affecting all neighborhoods equally – a phenomenon that has drawn criticism from customers, but one that energy providers say is tied to the need to keep power flowing at critical-need facilities, such as hospitals, water plants and emergency services.

“The parts of our service area experiencing outages are based on the status of the circuit they’re on,” Austin Energy says. “Areas with power likely share a circuit with a critical load circuit” that includes a hospital or other essential facilities.

In a normal emergency, Austin Energy says, “we rotate outages throughout our service area. Unfortunately, we are unable to rotate outages at this time because there are no other available non-critical load circuits to put into outage rotation.”

The best course now, the company adds, is for customers who have power to conserve it, as utilities and power generators work to restore capacity.

“The number of controlled outages we have to do remains high,” said Dan Woodfin, ERCOT’s senior director of system operations. He added, “We are optimistic that we will be able to reduce the number throughout the day.”

The operator and energy providers are also warning customers that they should get their homes ready for power to be turned back on, mainly by unplugging appliances and turning off the thermostat.

“Too much load on restored circuits at once can cause another outage,” ERCOT says.

A protein that helps Vibrio cholerae adapt to temperature has been identified, providing insights into how bacteria change their biology under different conditions -- ScienceDaily