Police hold a perimeter near the White House as demonstrators gather to protest police brutality in the morning hours of May 31, 2020, in Washington, D.C. 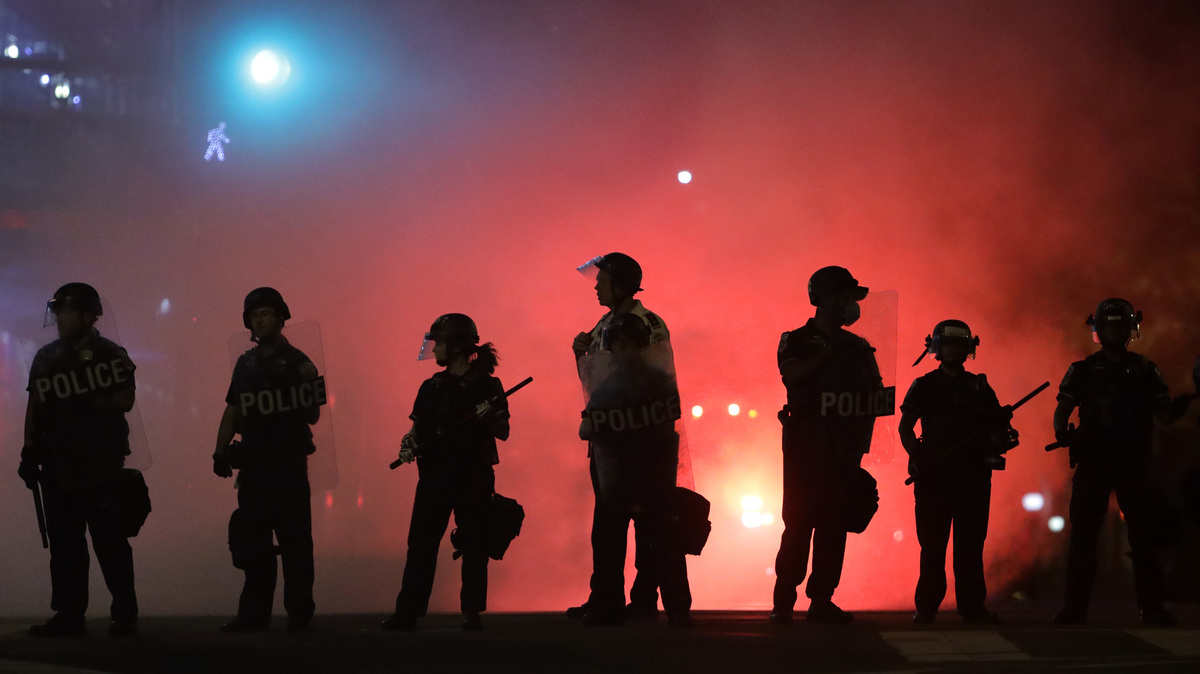 Police hold a perimeter near the White House as demonstrators gather to protest police brutality in the morning hours of May 31, 2020, in Washington, D.C.

In a summer of unrest over police violence, you might think that suing the police is a way for the families of those killed to get justice. It can be, but the amount of justice available — in monetary settlements from cities and towns — may depend on the local politics of where the killing happened.

That’s according to an NPR analysis of civil case settlements in 2015, the year following protests in Ferguson, Mo., over the police killing of Michael Brown.
We chose 2015 both because it was the immediate aftermath of the Ferguson protests, and because it was long enough ago that most of the cases would have been resolved.

During that year, we found 93 police cases in which police killed a person who had not been armed with a gun or other weapon. Of those cases, we found that 29 of them — nearly a third — ended in a settlement for the families of those killed. To find and categorize the cases, we reviewed reports in other media, as well as documents from courts and local governments.

The largest settlements stemming from those deaths occurred in counties that voted for Hillary Clinton in the 2016 presidential election.

In the counties that voted for Clinton, there were 61 fatal incidents. Twenty of those cases settled for a total of more than $50 million, or about $2.6 million per case. Most of the settlements were for more than $1 million.

In the counties that voted for candidate Donald Trump, there were 31 deaths. Eight of those cases were settled, for a total of $14 million – about $1.8 million per case. Three settlements topped $1 million.

(One death that led to a large settlement occurred in a city that straddles three counties where the presidential vote was mixed. It was excluded from our tally, as was one settlement where the amount was not disclosed.)

Now, six years after Ferguson, civil rights lawyers say there may be new connections developing between the courts and popular opinion on police. Black Lives Matter protests have been polarizing, they say, and are hardening political divisions about law enforcement on both sides.

The latest Ipsos/NPR poll out Sept. 3 backs this up: Three out of four Democrats support recent protests in the wake of the Kenosha, Wis., shooting of Jacob Blake, while fewer than 1 in 10 Republicans do.

Lawyers say that if such divisions extend to legal disputes over police behavior, that can mean stark differences around the country — in terms of localities’ inclination to settle cases, and of local jurors’ willingness to hold police officers accountable.

Dave O’Brien, an Iowa lawyer who exclusively represents civil rights plaintiffs, spoke with NPR just after losing a jury trial in a police brutality case in Sioux City, a conservative town in a conservative state.

It was a case he expected to win. And while he says he doesn’t want to read too much into a single case, he blames the loss on a community backlash against the Black Lives Matter movement.

“I’ve previously had a lot of success with true-blue conservative (jurors) – somebody who believes in individual liberty and not allowing the government to take advantage of an individual,” O’Brien says. “Those people, I love on my juries. But my reading of this case was that as a result of Black Lives Matter, the backlash has pushed them towards a pro-police stance that they previously didn’t take.”

O’Brien says that he used to be able to convince conservative gun owners to cherish the civil rights he was fighting for in police brutality cases, just as they value their right to bear arms. But something has changed. A protester stands face to face with police during demonstrations against the shooting of Jacob Blake in Kenosha, Wis., on August 25, 2020. 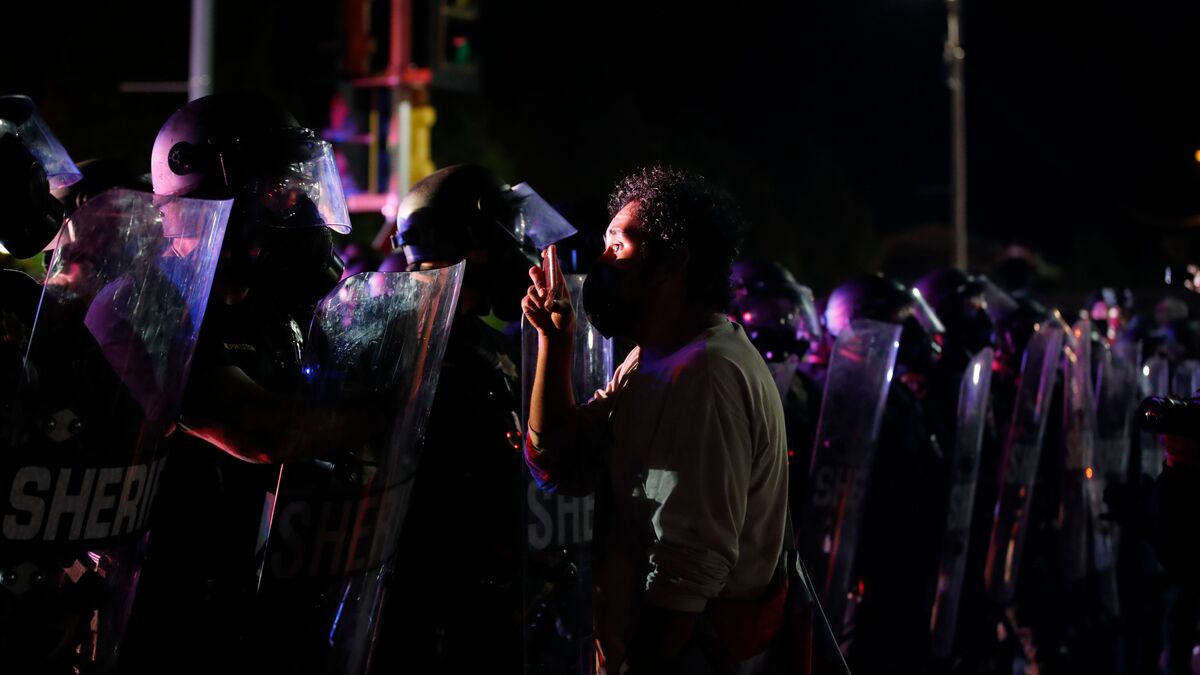 A protester stands face to face with police during demonstrations against the shooting of Jacob Blake in Kenosha, Wis., on August 25, 2020.

In conversations with potential jurors during jury selection, he says jurors “just felt like Black Lives Matter was a bit too much of an overreaction and anti-police. We had to overcome it, and we didn’t do it successfully.”

“I do believe that the jury pools here in California have become more open to finding police liable in appropriate cases,” he says. “As more people become aware that not all police officers can be believed, that in circumstances of excessive force, police officers should be held liable, that makes our job easier.”

Clark Neily, a former trial lawyer and vice president for criminal justice at the Cato Institute, a libertarian think tank, says NPR’s findings and what they suggest about the current political moment aren’t surprising. “This probably reflects, to some extent, the plaintiff’s lawyers and the defense lawyer’s projections about what’s likely to happen if the case proceeds to trial and there is a verdict,” he says.

The Cato Institute has called for increased legal accountability on the part of police, particularly by ending the legal doctrine of qualified immunity, which has insulated them from liability.

“We have a persistently racially disparate criminal justice system,” Neily says, “The communities of color tend to bear the brunt of the most significant pathologies in the system. It’s especially acute now with the frustration and resentment that is spilling out into the street.”

But some lawyers wonder if the legal environment this year and next will look more like the aftermath of 2014’s Ferguson protests in some cities, and in others, just the opposite.

“The cases where I had the most success and the largest settlement values was when the riots in Ferguson were going on,” says Missouri attorney Joshua Roberts.

Currently, though, the climate in southwest Missouri is “very pro-law enforcement,” he says.

In this summer of protests, William O. Wagstaff III, a New York civil rights attorney, says he routinely convenes groups of people of different demographic backgrounds to react to the facts of particular cases. He says he doesn’t want to make “outdated assumptions” about them.

“I have noticed a shift in perspectives from people I would previously consider to be liberal and sympathetic to issues of racial inequalities in policing,” Wagstaff says, “because they believe the rallying cry for accountability has gone too far.”

For families of those killed by police to file suit, they must first believe they can fight city hall, and find a lawyer who agrees. And if local politics seem pro-police, families may be discouraged from filing a suit at all. In fact, about half the deaths NPR reviewed did not result in a lawsuit.

To Sherene Mayner, the town of Paris, Texas, where her son, Garrett McKinney, was killed by police in 2015, seemed pro-police and wary of outsiders — as some there called her son after his death.

Mayner, who works as a Realtor in Austin, says her son suffered from schizophrenia and physically attacked the officer after being tased. She says the small-town climate in Paris inhibited her from asking questions about Garrett’s death.

She fights back tears as she recounts that months later, the Highway Patrol officer who shot Garrett during a struggle was awarded a Purple Heart by the Texas Department of Public Safety in connection with the shooting.
“He just shot my son, and no one called me to say, ‘I’m sorry,'” she says, remembering seeing a photo of the officer, Timothy Keele, displaying his award.

“That always bothered me,” she says, “He got this award, and he’s all smiling and grinning when he’s getting this award, and I’m like, ‘Oh, you’ve got to be kidding me.'”

So far, Mayner has not filed a lawsuit in the shooting.

How some services, like Donut and Hallway, are attempting to revive serendipitous encounters between employees during remote work, many built atop Slack (Katherine Bindley/Wall Street Journal)