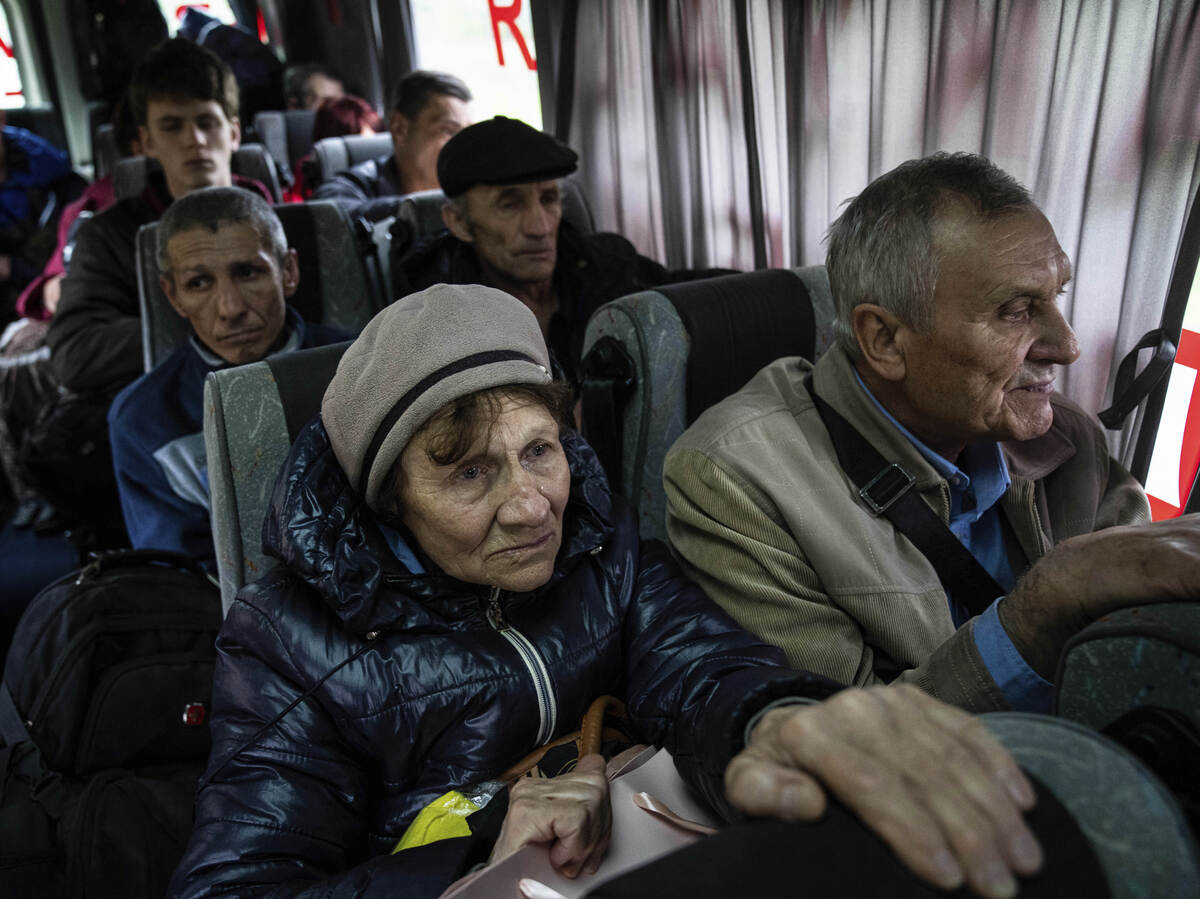 ZAPORIZHZHIA, Ukraine — U.S. Speaker of the House of Representatives Nancy Pelosi has met with Ukraine’s president during a visit to the country’s embattled capital, Kyiv.

Pelosi, second in line to the presidency after the vice president, is the highest-ranking American leader to visit Ukraine since the start of the war, and her visit marks a major show of continuing support for the country’s struggle against Russia.

Zelenskyy greeted the delegation outdoors before they adjourned to a meeting room where he said, “I am grateful to you for this signal of strong support from the United States, the people, and Congress — bicameral and bipartisan support.”

“This shows that the United States today is a leader in strong support for Ukraine during the war against the aggression of the Russian Federation,” Zelenskyy said.

Pelosi told Zelenskyy: “We believe that we are visiting you to say thank you for your fight for freedom.”

“We are on a frontier of freedom and your fight is a fight for everyone. Our commitment is to be there for you until the fight is done,” Pelosi added.

The visit was not previously announced.

Previously, some women and children were evacuated from a steel plant that is the last defensive stronghold in the bombed-out ruins of the port city of Mariupol, a Ukrainian official and Russian state news organizations said, but hundreds are believed to remain trapped with little food, water or medicine.

The United Nations was working to broker an evacuation of the up to 1,000 civilians living beneath the sprawling Soviet-era Azovstal plant after numerous previous attempts failed. Ukraine has not said how many fighters are also in the plant, the only part of Mariupol not occupied by Russian forces, but Russia put the number at about 2,000. An estimated 100,000 civilians remain in the city.

U.N. humanitarian spokesperson Saviano Abreu said the world organization was negotiating with authorities in Moscow and Kyiv, but he could not provide details of the ongoing evacuation effort “because of the complexity and fluidity of the operation.”

“There is, right now, ongoing, high-level engagements with all the governments, Russia and Ukraine, to make sure that you can save civilians and support the evacuation of civilians from the plant,” Abreu told the AP. He would not confirm video posted on social media purportedly showing U.N.-marked vehicles in Mariupol.

In the town of Lyman in the Donetsk region, where at least half the population has fled Russian shelling, around 20 elderly people and children clutching bags along with their dogs and cats boarded a minivan marked with a sign reading “evacuation of children” in Ukrainian. It sped off toward the city of Dnipro as explosions were heard in the distance.

“The liberators have come and have freed us from what? Our lives?” said Nina Mihaylenko, a professor of Russian language and literature, referring to the Russian forces.

Galina Zuev and her husband Aleksander opted to stay, unwilling to leave the place they’d spent their entire lives.

“I am living not so well. There is a war here. They are shelling all the time. The windows have been smashed in our house. The missiles are in the yards,” said 68-year-old Galina. “It is frightening.”

Russian forces have embarked on a major military operation to seize significant parts of southern and eastern Ukraine, the country’s industrial heartland. Ukrainian forces fought village by village Saturday to hold back the Russian advance.

Russia’s RIA Novosti news agency said Saturday that 19 adults and six children were brought out from the steelworks, but gave no further details.

A top official with the Azov Regiment, the Ukrainian unit defending the plant, said 20 civilians were evacuated during a cease-fire, though it was not clear if he was referring to the same group. There was no confirmation from the U.N.

“These are women and children,” Sviatoslav Palamar said in a video posted on the regiment’s Telegram channel. He also called for the evacuation of the wounded: “We don’t know why they are not taken away and their evacuation to the territory controlled by Ukraine is not being discussed.”

Video and images from inside the plant, shared with The Associated Press by two Ukrainian women who said their husbands are among the fighters refusing to surrender there, showed unidentified men with stained bandages; others had open wounds or amputated limbs.

A skeleton medical staff was treating at least 600 wounded people, said the women, who identified their husbands as members of the Azov Regiment of Ukraine’s National Guard. Some of the wounds were rotting with gangrene, they said.

In the video the men said that they eat just once daily and share as little as 1.5 liters (50 ounces) of water a day among four people, and that supplies inside the besieged facility are depleted.

One shirtless man appeared to be in pain as he described his wounds: two broken ribs, a punctured lung and a dislocated arm that “was hanging on the flesh.”

“I want to tell everyone who sees this: If you will not stop this here, in Ukraine, it will go further, to Europe,” he said.

The AP could not independently verify the date and location of the video, which the women said was taken in the last week in the maze of corridors and bunkers beneath the plant.

The women urged that Ukrainian fighters also be evacuated alongside civilians, warning they could be tortured and executed if captured. “The lives of soldiers matter, too,” Yuliia Fedusiuk told the AP in Rome.

In his nightly video address late Saturday, Ukrainian President Volodymyr Zelenskyy switched into Russian to urge Russian troops not to fight in Ukraine, saying even their generals expect that thousands more of them will die.

The president accused Moscow of recruiting new soldiers “with little motivation and little combat experience” so that units gutted early in the war can be thrown back into battle.

“Every Russian soldier can still save his own life,” Zelenskyy said. “It’s better for you to survive in Russia than to perish on our land.”

— Ukrainian Deputy Agriculture Minister Taras Vysotsky said in televised remarks that Russian forces have seized hundreds of thousands of tons of grain in territory under their control. Ukraine is a major grain producer, and the invasion has pushed up world prices and raised concerns about shortages.

— The bodies of three men were found buried in a forest near the Kyiv suburb of Bucha, the head of the Kyiv region’s police force said. The men, whose bodies were found Friday, had been tortured before they were shot in the head, Andriy Nebytov wrote on Facebook. Ukrainian officials have alleged that retreating Russian troops carried out mass killings of civilians in Bucha.

— Russian Foreign Minister Sergey Lavrov said in an interview that Russian and Ukrainian negotiators talk “almost every day.” However, he told Chinese state news agency Xinhua, “progress has not been easy.”

— Two buses sent to evacuate residents from the eastern town of Popasna were fired upon, and contact with the organizers was lost. Mayor Nikolai Khanatov said: “We know that (the buses) reached the town and then came under fire from an enemy sabotage and reconnaissance group.”

Getting a full picture of the unfolding battle in eastern Ukraine has been difficult because airstrikes and artillery barrages have made it extremely dangerous for reporters to move around. Also, both Ukraine and Moscow-backed rebels have introduced tight restrictions on reporting from the combat zone.

But Western military analysts suggested that the offensive in the Donbas region, which includes Mariupol, was going much slower than planned. So far, Russian troops and the separatists appeared to have made only minor gains in the month since Moscow said it would focus its military strength in the east.

Numerically, Russia’s military manpower vastly exceeds Ukraine’s. In the days before the war began, Western intelligence estimated Russia had positioned near the border as many as 190,000 troops; Ukraine’s standing military totals about 200,000, spread throughout the country.

With plenty of firepower still in reserve, Russia’s offensive still could intensify and overrun the Ukrainians. Overall the Russian army has an estimated 900,000 active-duty personnel. Russia also has a much larger air force and navy.

Hundreds of millions of dollars in military assistance has flowed into Ukraine since the war began, but Russia’s vast armories mean Ukraine will continue to require huge amounts of support.