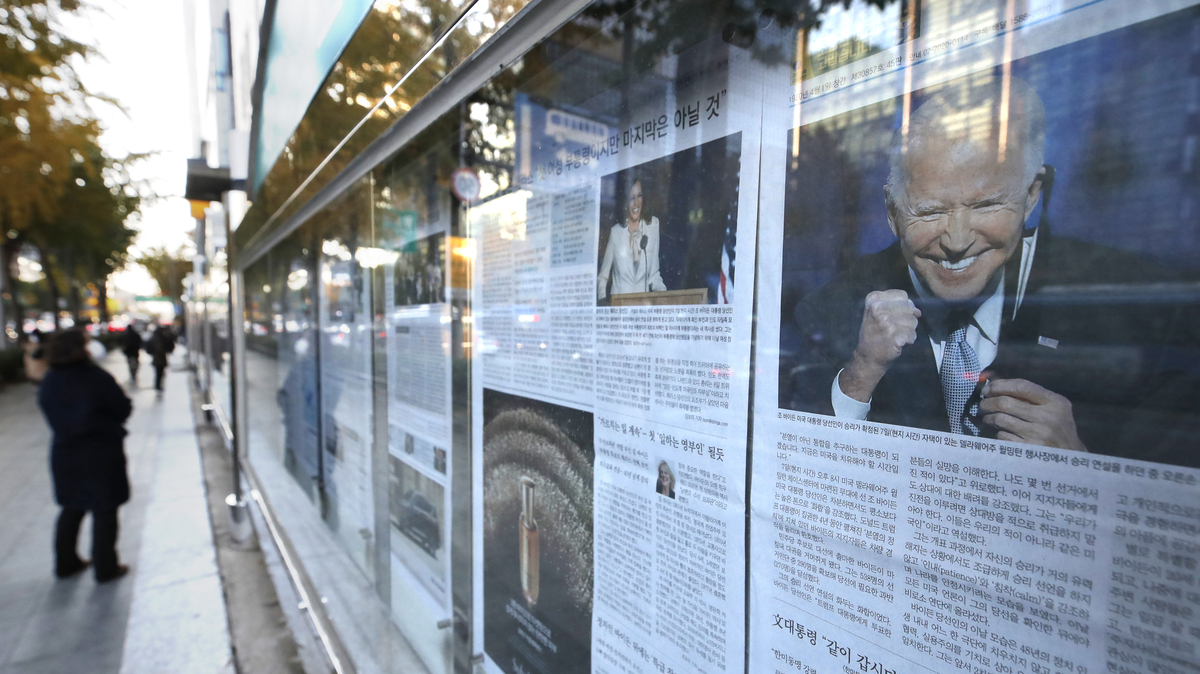 The United States’ chief allies in East Asia, South Korea and Japan, welcomed Joe Biden’s electoral victory over the weekend, expecting that the former vice president will rebuild their decades-old alliances, which have been challenged during four years of unprecedented strain under the Trump administration.

After extending congratulations on Twitter, Prime Minister Yoshihide Suga told reporters Monday he hopes to work with Biden to strengthen the U.S.-Japan alliance, and “secure the peace and prosperity of the Indo-Pacific region.”

South Korean President Moon Jae-in also posted a congratulatory weekend tweet, before telling reporters Monday that he will work to “make sure that there won’t be any vacuum in the strengthening of the South Korea-U.S. alliance and progress in the Korea peace process.”

President Trump has been criticized for seeing little value in alliances, except as a way to squeeze revenue from wealthy allies who he believes are perfectly capable of defending themselves. Trump has even suggested they develop their own nuclear arsenals.

Both Seoul and Tokyo have come under pressure from Trump to pay more for the cost of stationing troops in their countries, or face the possibility that the U.S. could reduce its military presence. He also pressured both countries to join the U.S. in confronting China, with which South Korea and Japan both have strong trade ties.

Biden has pledged to strengthen the U.S.-South Korean alliance, “rather than extorting Seoul with reckless threats to remove our troops,” Biden wrote in a contribution to the Yonhap News Agency, referring to Trump’s policies.

While there may be less pressure from Biden on Seoul and Tokyo to pick sides, strategic competition between the U.S. and China is sure to continue, because “the Chinese are challenging [the U.S.] position in this part of the world, as we did in the 1930s,” says Kunihiko Miyake, research director at the Canon Institute for Global Studies in Tokyo.

Another strain on the network of U.S. alliances in Asia comes from the historic animosity between Seoul and Tokyo, particularly stemming from World War II, when Japan brutally colonized the Korean peninsula.

Critics have accused the Trump administration of allowing this feud to simmer, unchecked. But Miyake argues that if he were a U.S. diplomat dealing with Seoul and Tokyo, “I wouldn’t mediate, because you get scorched.”

“If this was a purely diplomatic issue or a purely national security issue, it would be easier to intervene,” but Miyake says it’s not, and both nations’ leaders, he argues, manipulate the historical issue for domestic political gain, regardless of external pressures.

Biden has also promised “principled diplomacy” in working toward the denuclearization of North Korea. Many take that to mean that Biden will work more closely with Seoul and Tokyo, and not enter into high-stakes negotiations directly with the North’s leader Kim Jong Un, until the content of a possible deal has been hashed out in working-level talks.

North Korea prefers the top-down approach, and Kim gives his negotiators minimal leeway to negotiate. This contributed to the collapse of a second Trump-Kim summit in Vietnam in 2019, leaving Kim bitter and skeptical about the prospect for a deal with the U.S.

“Kim Jong Un was so frustrated by Hanoi, he’s never going to believe what America says, diplomatically, after that experience,” says Ahn Byongjin, a professor of American studies at Kyung Hee University in Seoul.

Many observers are skeptical of any breakthrough in denuclearization on the Korean peninsula, or improving frosty ties between the North and South.

A survey conducted Friday by South Korean pollster Realmeter found 48.8% of respondents expected “little difference” in inter-Korean ties under Biden, 16.4% expect ties to improve and 26.5% think they will worsen.

North Korean state media have made no mention of Biden’s electoral win as of Monday. South Korean Foreign Minister Kang Kyung-hwa, in Washington on Monday to meet with her counterpart Secretary of State Mike Pompeo, predicted that Biden is unlikely to exercise “strategic patience” and wait Kim Jong Un out, as President Obama hoped to do, although she cautioned it’s “too early to make predictions.”

Of course, Biden will need to focus initially on healing deep divisions within the United States. Kyung Hee University’s Ahn Byung-jin argues that this too will help restore U.S. credibility and international political capital in the eyes of its allies.

He notes that during the 1960s, President Lyndon Johnson pushed hard on civil rights legislation “partly because he was thinking about competition with the Soviet Union” and was concerned that segregation in the U.S. damaged its image abroad.

NPR’s Se Eun Gong in Seoul contributed to this report.