Before the end of the year, Los Angeles school board members intend to announce the most consequential decision of their tenure — the hiring of a new superintendent.

The job, considered to be one of the most challenging in public education, is being filled at a critical moment for the nation’s second-largest school district. The system is flush with billions of dollars in coronavirus relief aid, additional federal funding and surging state tax revenues. But there is mountainous work ahead. Students are in crisis — struggling to recover from deep pandemic-related learning setbacks as well as mental health issues brought on by extended periods of isolation and other hardships. The district also is beset with declining enrollment and a long-term structural budget deficit.

“The last 21 months have been devastating for so many of the families we serve in L.A. Unified,” said school board President Kelly Gonez. “The pandemic has delivered an unequal burden of illness, death, job loss and trauma that has disproportionately fallen on communities of color. Our superintendent will need to reckon with the profound impacts of the pandemic, the uprisings for racial justice, and the urgent needs of our students and families.”

Officials — who are conducting interviews in the final stages of their national search — would not confirm who has applied. But Gonez said the new leader should be “an experienced educator who can unify the broader Los Angeles community, commit to a long tenure, center the voices and needs of those most historically underserved, build on the talent in our system, and execute at scale to ensure we meet the long-term goals for our students.”

A pool of potential candidates has emerged based on interviews with sources in education leadership and recruitment across the country.

Among those currently inside the school system, the candidates are thought to include interim Supt. Megan Reilly, Chief Academic Officer Alison Yoshimoto-Towery and regional administrator Frances Baez. Someone who straddles the line between insider and outsider is Joan Sullivan, chief executive of the nonprofit Partnership for Los Angeles Schools, which manages 19 schools on behalf of the district.

These four candidates have become something of an open secret, despite efforts by the Board of Education to shield all applicants from disclosure. Outside contenders are more difficult to identify and could come from fields other than education.

But some individuals would emerge as potential candidates in any L.A. search — based on their experience and how well they align with the goals of the board, whose 4-3 majority is united by a desire for aggressive change.

In a school system that is 90% students of color — including 74% Latino and 8% Black student enrollment — it appears the candidates are also predominately people of color. Sources told The Times that the first scheduled interviews of eight or nine applicants did not include white males. Nor were there any Black candidates, although it was early in the process and the situation could change.

Baez is the only Latina among the likely group with current district ties; the outside group was expected to have strong Latino representation.

Candidates who could be part of the discussion in any search for the top leadership job of a major district like New York City, L.A., Chicago or San Diego, which also is searching for a superintendent, include Miami-Dade County schools Supt. Alberto Carvalho.

Carvalho, who is of Portuguese descent and immigrated to the U.S. at 17, having to learn to speak English, accepted the New York City superintendent’s job in 2018 but quickly changed his mind, deciding to remain in Miami. 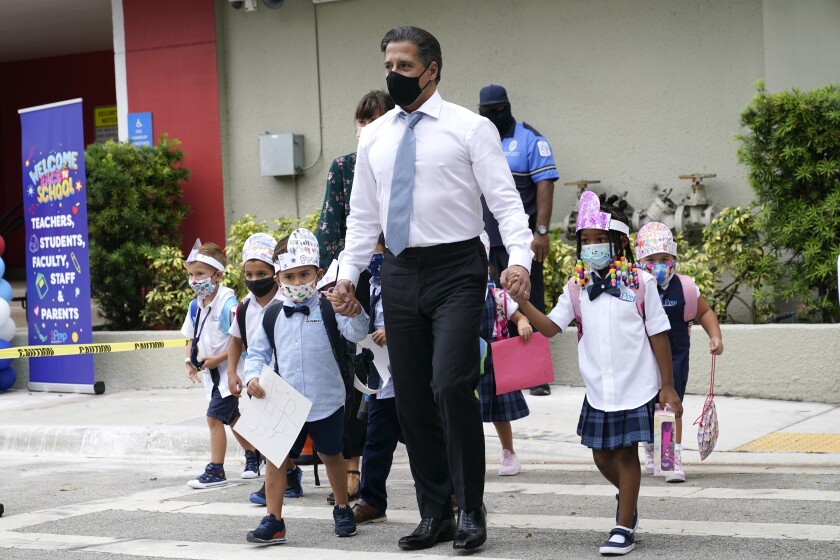 Another is Richard Carranza, who got the New York City job when Carvalho backed out. He resigned in March. Carranza interviewed for the L.A. job in 2015 before pulling out. Another name on a perennial shortlist would be longtime Dallas Supt. Mike Hinojosa, who defied Texas Gov. Greg Abbott’s attempts to ban requirements for face coverings in school.

Closer to home, L.A. County Office of Education Supt. Debra Duardo — a former senior L.A. Unified administrator — would probably get a serious look, but she said she did not apply.

“I am looking forward to working closely with the next LAUSD superintendent,” Duardo said.

Another insider-outsider who did not apply is Glendale Unified Supt. Vivian Ekchian, who held high-level positions in L.A. Unified, including interim superintendent before the selection of Austin Beutner, the most recent L.A. schools chief.

More than 90% of parents, community members and employees said in a recent district survey that they want the next superintendent to have “experience working in public schools as a teacher and/or administrator.” At nearly the same rate, those who responded also called for someone who has experience “working in and with large, diverse communities” and “managing a very large organization in transition.”

The school board could look for a different kind of leader, as it did in 2018, when, by a 4-3 vote in closed session, members opted for Beutner, a businessman with no education management experience. He guided the school system through a teachers strike and the first year of the COVID-19 pandemic before stepping down at the end of June. 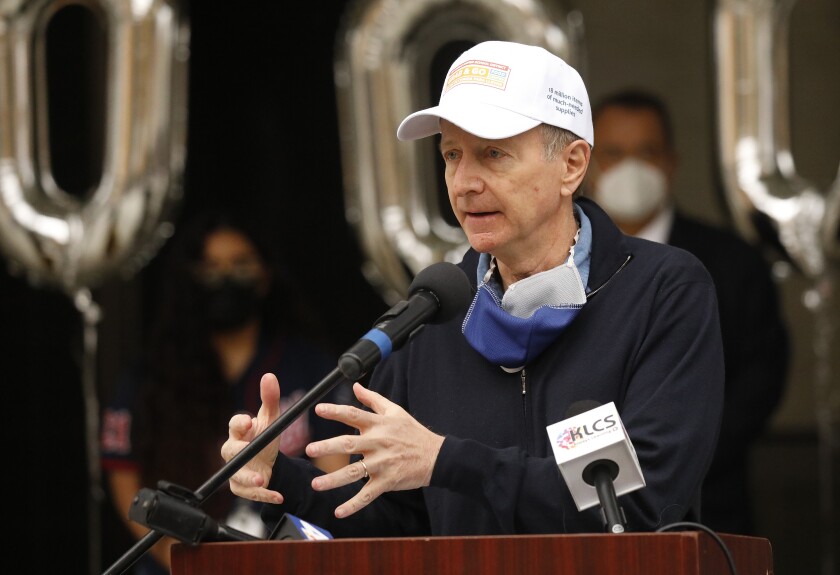 Former L.A. schools Supt. Austin Beutner, who stepped down at the end of June.

Beutner’s candidacy and his term as superintendent were aided by his deep connections within L.A.‘s philanthropic community. Someone in that mold would be Miguel Santana, head of the Weingart Foundation, who previously was chief executive of the county’s Fairplex complex and the city administrative officer for Los Angeles. He said he’s not interested but has thoughts about what L.A. Unified should be looking for.

“The district needs to go through a period of stability,” Santana said. “It needs a person who can hit the ground running on Day 1 and has credibility from all of the community.”

The district also could choose an outsider known for political skills — for a job that is intensely political — as the school board did in 2000 with the selection of three-term Colorado Gov. Roy Romer. Romer parlayed that political acumen into a six-year stint and departed on his own terms. No one since has lasted even four years. Romer has called the position the hardest job he’d ever had. 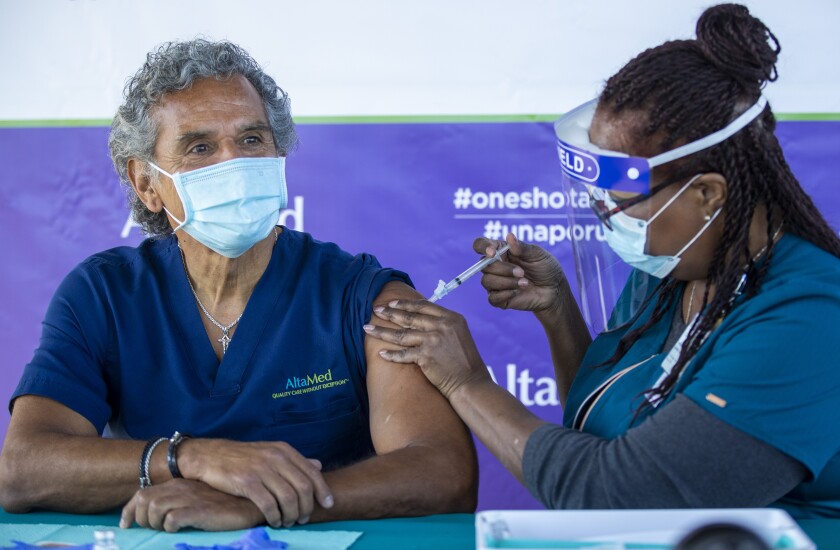 Former L.A. Mayor Antonio Villaraigosa gets a COVID-19 vaccine shot in January, part of an effort to encourage vaccination. He’s long had an interest in reform measures at L.A. Unified.

Villaraigosa has had a keen interest in education — as mayor he tried to win authority over L.A. Unified but lost in court, and he once blasted United Teachers Los Angeles as “the one unwavering roadblock” to improving local public education.

The former mayor, who is traveling outside the country, was not immediately available for comment.

Those currently with ties to L.A. Unified each bring relevant skills and background.

Reilly, the interim superintendent, has management experience both outside and inside education and a solid command of the district’s financial structure. But she’s never been a public school teacher or principal, which opened the door for other internal applicants.

Yoshimoto-Towery is the person with the most leadership experience in academic matters and has been crafting the learning initiatives that are now underway. Baez has been in the district more than 25 years, rising from teacher to administrator — recently becoming superintendent for Local District Central, one of six regional branches of L.A. Unified. Sullivan is well known in the philanthropic community and has experience trying to turn around some of the district schools where students have struggled the most.