Joe Biden holds a campaign rally on March 2 in Dallas with former Texas Rep. Beto O’Rourke. Biden’s presidential campaign is going on the air with an ad in Texas. 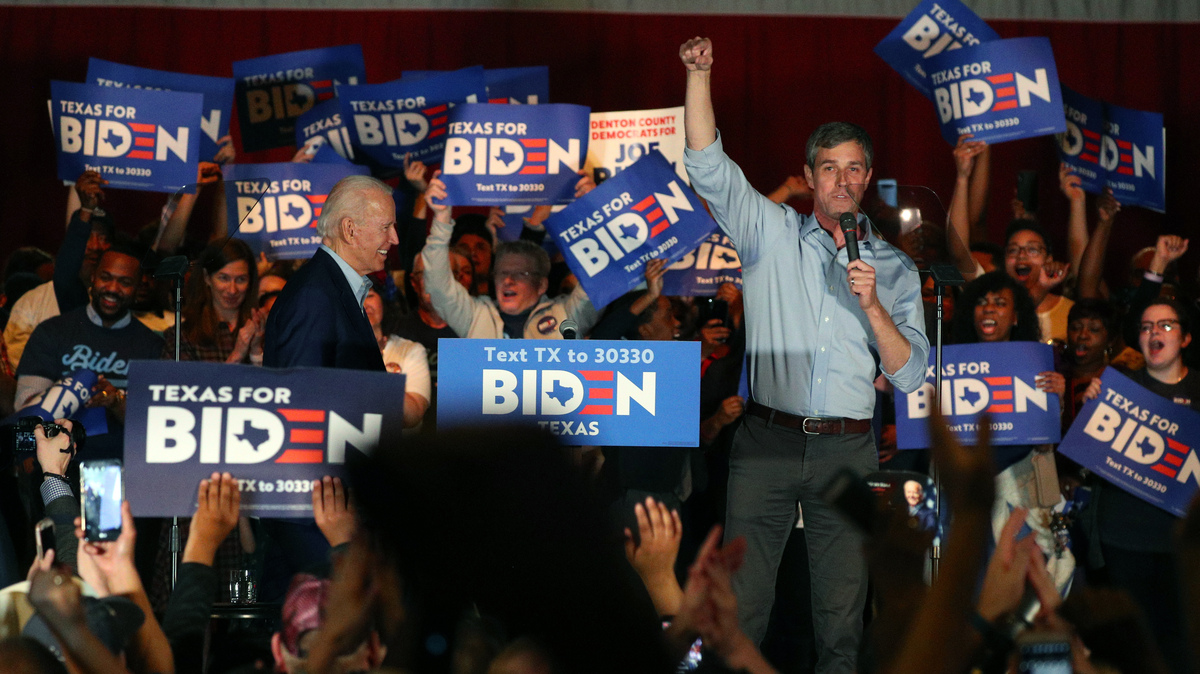 Joe Biden holds a campaign rally on March 2 in Dallas with former Texas Rep. Beto O’Rourke. Biden’s presidential campaign is going on the air with an ad in Texas.

The 60-second TV spot, titled “Tough,” is part of a six-figure, multistate ad buy that deals with the rising number of COVID-19 cases in the country. The spot is simultaneously an attempt to comfort anxious Americans, offer an indirect leadership contrast with President Trump, and provide simple public health guidance. The ad ends with a message of advice that flashes across the screen: Stay safe, wear a mask.

This new TV spot is part of a four-state ad buy the Biden campaign announced Tuesday that also includes Arizona, North Carolina and Florida. In recent weeks, coronavirus cases have soared across the Sun Belt, with both Florida and Texas reporting record daily case numbers.

The campaign also intends to release digital videos of Biden calling families in those four states. And it plans to air Spanish language-captioned versions of the ad in Arizona, Florida and Texas on YouTube, Facebook and Univision.

Public opinion surveys have shown an unexpectedly close race between Biden and Trump in Texas. The polling average from FiveThirtyEight now shows a tied contest, and a recent Dallas Morning News survey found Biden leading by 5 points — which, if accurate, would be a game changer for the election. In 2016, Trump won Texas by 9 points. Republicans have long depended on the state in order to win the White House. No Democrat has won the state since Jimmy Carter in 1976.

Texas has the second-biggest haul of electoral votes, with 38.

Texas has felt politically volatile in recent weeks as the pandemic has spread. Earlier this month, because cases were rising so rapidly, the Republican Gov. Greg Abbott reversed himself and issued a statewide mask mandate.

This new ad buy is a sign of how Biden is trying to tap into a possibly ambitious political map through the pandemic. And it’s an indication that after he and Democrats outraised the president and Republicans over the second quarter, Biden is beginning to ramp up his TV ad investments. To date, he has been vastly outmatched.

According to an analysis from the Wesleyan Media Project in partnership with OpenSecrets, the Trump campaign has been far more aggressive in inundating the airwaves than Biden has. Their analysis found that between May 11 and June 28, of the nearly 85,000 total TV ads about the presidential race, 50,000 came from Trump’s campaign, and another 11,600 were purchased by outside groups supporting the president.

The announcement of the Biden ad buy, on Tuesday, comes as Texas holds its statewide primaries. Among the races, voters will select which Democrat will challenge Republican Sen. John Cornyn in November.

For The First Time, Scientists Have Completely Sequenced a Human Chromosome