Trash sits out for collection on a Philadelphia street on Thursday. The omicron variant is sickening so many sanitation workers that waste collection in Philadelphia and other cities has been delayed or suspended. 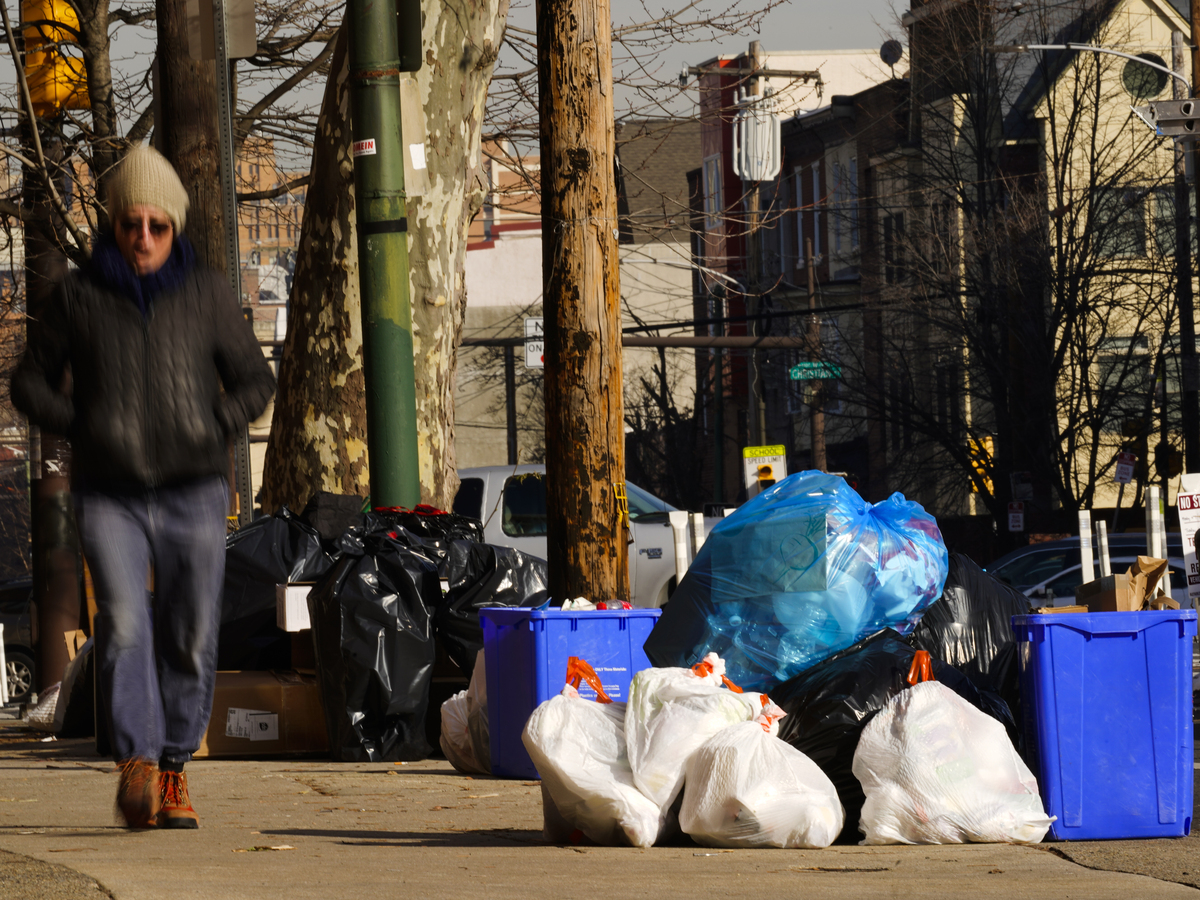 Trash sits out for collection on a Philadelphia street on Thursday. The omicron variant is sickening so many sanitation workers that waste collection in Philadelphia and other cities has been delayed or suspended.

NASHVILLE, Tenn. — The omicron variant is sickening so many sanitation workers around the U.S. that some cities have had to delay or suspend garbage or recycling pickup, angering residents shocked that governments can’t perform this most basic of functions.

The slowdowns have caused recycling bins full of Christmas gift boxes and wrapping paper to languish on Nashville curbs, trash bags to pile up on Philadelphia streets, and uncollected yard waste — grass clippings, leaves, branches — to block sidewalks in Atlanta.

“You know that they could find the money to do it if they wanted to,” she said. “If it was a business that wanted to come in here, they would dump money in to make it happen.”

Cities including Atlanta, Nashville and Louisville are so shorthanded they have temporarily stopped collecting things like recyclable bottles, cans, paper and plastic, yard waste or oversized junk to focus on the grosser, smellier stuff. The delays are more than annoyance to residents, creating problems such as clogged storm drains and blocked sidewalks.

Nashville City Council member Freddie O’Connell was just as surprised as his constituents when he received notice before Christmas that the city was halting curbside recycling.

“I was just stunned there wasn’t an alternative or a back-up plan,” he said. “No hot line for people who are mobility impaired or don’t have reliable access to a car” to carry their recyclables to a central drop-off site.

“It feels like a failure of governance,” he added.

The garbage crisis is actually the third of the pandemic. The first happened in the spring of 2020, when COVID-19 took hold in the U.S. Problems arose again as the delta variant spiked over the summer.

The highly contagious variant hit just when Americans were generating a lot of trash — over the Christmas holidays. Combine that with a relatively low vaccination level among front-line sanitation workers and you have a “perfect storm for delayed collection,” the association’s executive director, David Biderman, said this week.

In some communities, up to a quarter of the waste-collection workforce is calling in sick, Biderman said.

Garbage collection has become just another of the many basic services disrupted by omicron. Around the U.S., teachers, firefighters, police officers and transit workers have been out sick in large numbers.

Atlanta officials said Monday that because of the worker shortage, recycling and yard waste will be picked up “as staffing allows.”

Los Angeles said delays in the collection of recyclables could continue through the month.

New York City, which boasts the largest municipal sanitation force in the world, had around 2,000 of its 7,000 workers out because of the latest round of the coronavirus, but the rest are working long hours to clear a backlog of waste. They city has not suspended any services.

Harry Nespoli, president of the union local representing the city’s sanitation workers, said some are coming back after quarantining, while others are testing positive for the virus: “Right now it’s a swinging door.”

In Philadelphia, sometimes called Filthadelphia because of the condition of its streets, around 10% to 15% of the 900-person sanitation workforce is out on any given day, leading to delays in waste collection, according to Streets Commissioner Carlton Williams.

“When people are out, we can’t just hire to replace them,” he said. “We have to give them time to get well.”

To keep the trash from piling up, some municipalities are hiring temporary workers or contracting with private haulers. Some are offering signing or retention bonuses or pay raises.

That allowed the city to restore recycling collection in November after halting it in July and continue routine pickups despite the omicron surge, said spokesperson Mary Beth Ikard. 12 surprising ways people are finding joy in the pandemic : Shots