Refugees lay on a road close to Mytilene, the capital of the Greek island of Lesbos, after a fire destroyed Moria refugee camp, on Thursday. A massive fire ravaged the island’s main migrant camp on Tuesday night leaving more than 12,000 asylum-seekers homeless. 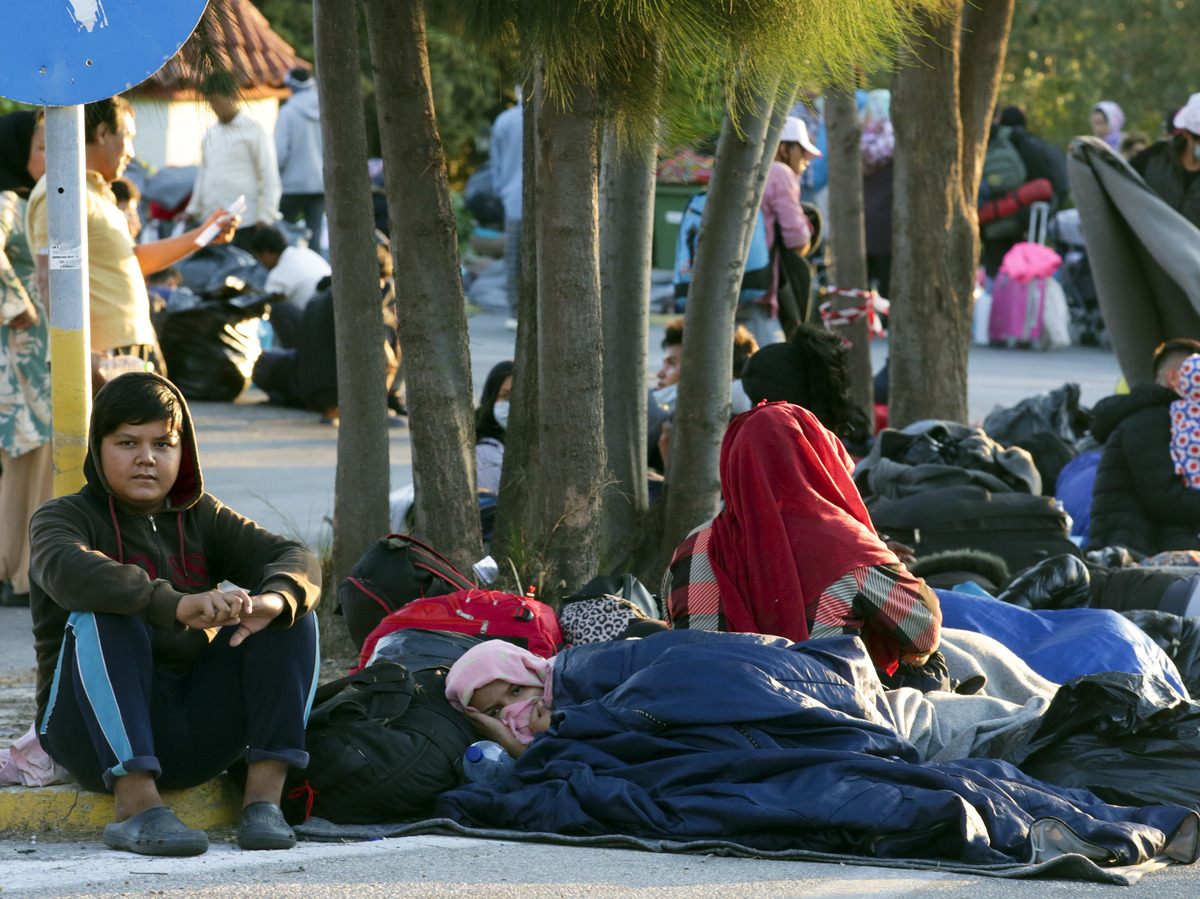 Refugees lay on a road close to Mytilene, the capital of the Greek island of Lesbos, after a fire destroyed Moria refugee camp, on Thursday. A massive fire ravaged the island’s main migrant camp on Tuesday night leaving more than 12,000 asylum-seekers homeless.

Ra’ed Alabed films his tent’s smoldering remains in what he called the “hell camp” on the Greek island of Lesbos.

“This was my home,” says the 45-year-old Syrian refugee in a video he shared with NPR, pointing to a blackened cooking pot and a thicket of charred olive-tree branches. “My home in the most horrible place.”

Multiple fires this week destroyed the tents of more than 12,000 refugees living in Europe’s largest refugee camp, called Moria after a nearby village. For years, the camp has symbolized the European Union’s failure to manage migration in a humane way.

Since 2015, when more than 850,000 asylum-seekers crossed the Aegean Sea from Turkey to EU member Greece, Brussels has tried to tame a nationalist, anti-immigrant backlash within its member states by deterring even more asylum-seekers from reaching Europe. A man in the burned Moria refugee camp in Lesbos, Greece, Thursday. A second fire the island’s notoriously overcrowded Moria refugee camp destroyed nearly everything that had been spared in an earlier blaze, Greece’s migration ministry said Thursday, leaving thousands more in need of emergency housing. 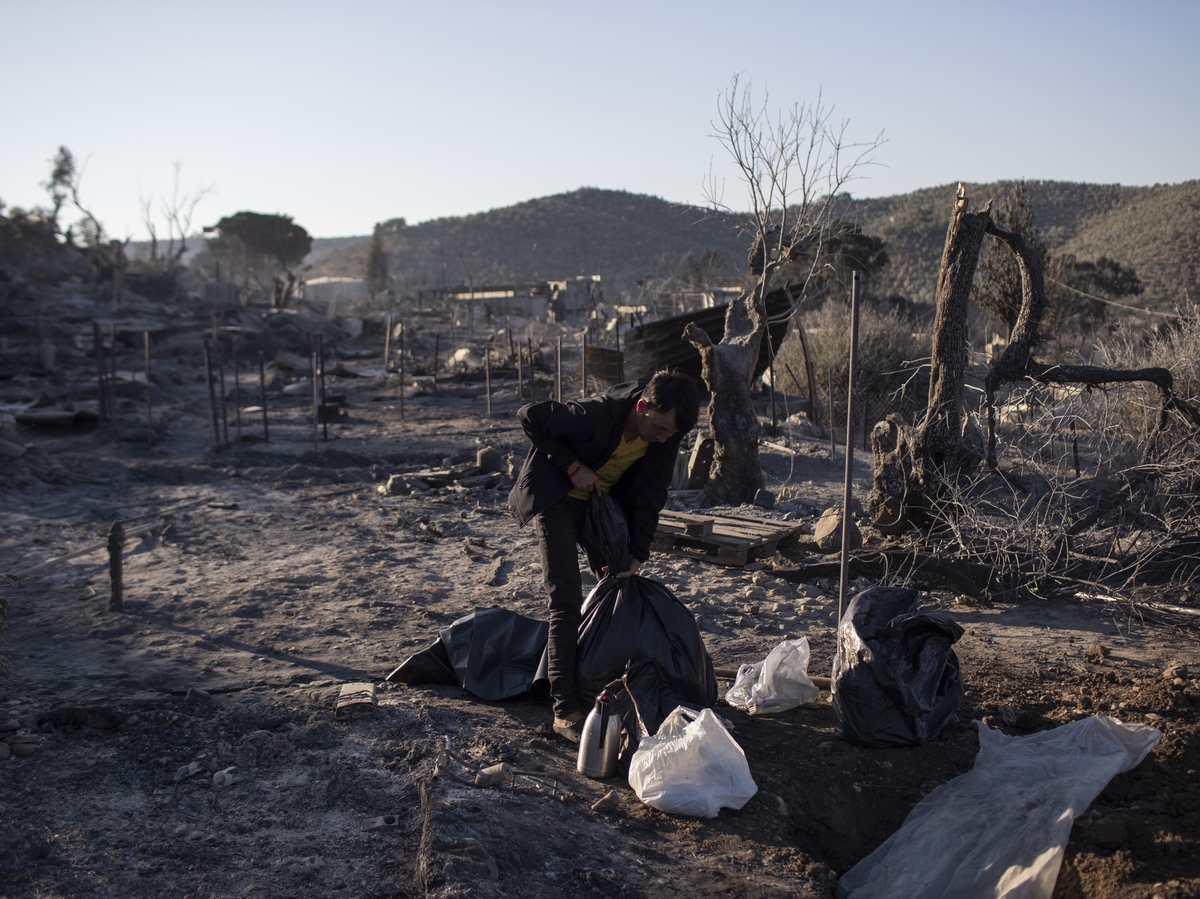 A man in the burned Moria refugee camp in Lesbos, Greece, Thursday. A second fire the island’s notoriously overcrowded Moria refugee camp destroyed nearly everything that had been spared in an earlier blaze, Greece’s migration ministry said Thursday, leaving thousands more in need of emergency housing.

“Moria refugee camp is designed and sustained as part of the European Union’s border,” says Amelia Cooper of the Lesbos Legal Centre, which assists refugees with asylum issues. “It’s deliberately constructed to deter future migrants from crossing by willfully subjecting those who live here to inhumane and unsafe conditions.”

The camp, bordered by barbed wire, was built to hold no more than 3,000 people; it often held four to seven times that number. Trash was left to rot, the few toilets overflowed with waste, and there was a severe shortage of water taps and soap. Mothers washed babies in cold water. Families waited in line for food that was often spoiled.

“It’s just so sad and upsetting to see people who really need help, who really need assistance, who are beneficiaries of international protection, being kept in these conditions,” says Faris Al-Jawad, communications manager for Doctors Without Borders. “We’ve been pushing for years for the evacuation of vulnerable people. This was a ticking time bomb that was waiting to explode.”

Alabed, the Syrian refugee, says he founded the Moria White Helmets — a volunteer safety organization — because of previous fires. He remembers the most recent blazes starting on Tuesday night, after protests against a camp lockdown due to a coronavirus outbreak.

The flames were soon outside his tent and the nearby one shared by his daughter, son-in-law and 4-month-old granddaughter. The camp had no fire evacuation plan that he knew of, so he took charge.

“I said, ‘please, leave your tents, take your stuff, as much as you can, quickly,'” he recalls. “I tried to stay until everyone was out.”

Greek authorities have reported no serious injuries, though some refugees suffered from smoke inhalation. Migrants flee from the Moria refugee camp during a fire on Wednesday. It was one of multiple fires this week in Greece’s notoriously overcrowded refugee camp on the island of Lesbos. The fires caused no injuries, but they renewed criticism of Europe’s migration policy.

Jawad, of Doctors Without Borders, saw people running out of the burning camp in terror.

“I saw babies on the side of the street in baskets,” he says. “I saw old people in wheelchairs just absolutely stunned.”

Alabed says it’s a miracle no one died. He fled Syria to escape catastrophes like this.

Now he and other refugees are homeless. Many are sleeping on the streets or in the woods.

Greek Prime Minister Kyriakos Mitsotakis said in a televised address on Wednesday that he understands conditions in the camp were bad. But he implied refugees started the fire because they were angry about the COVID-19 lockdown.

“There’s no excuse for violent reactions to coronavirus health protocols and checks,” he said, “especially when it leads to this kind of unrest.”

Greek government spokesman Stelios Petsas told reporters on Wednesday that only unaccompanied minors will be able to leave lesbos for the Greek mainland. He accused migrants of setting more fires at the camp on Wednesday night.

“Some people don’t respect the country hosting them,” he said.

European Union leaders said they feel terrible about the fires and are sending aid to Greece. EU Home Affairs Commissioner Ylva Johansson has promised funds for the relocation to Athens and housing of some 400 unaccompanied minors at Moria.

But Margaritis Schinas, the European Commission vice president who oversees migration, told German broadcaster ZDF that what happened in Moria camp “is not Europe’s fault.” He called it a failure of European solidarity. EU countries like Hungary and Poland, where anti-immigrant nationalism runs strong, have long refused to accept refugees stuck in camps in Greece.

Omid Alizadah, a 30-year-old Afghan pharmacist and refugee who lived in Moria camp until the fires, says EU leaders should be ashamed.

“I grew up in Kabul, and I have seen bad things,” he says. “I have never seen anything as bad as Moria camp.”

Alizadah lived in a tent in the camp for several months with his wife and 4-year-old son, who begged him to find the family a home “for human beings.” He tried to protect them from attacks by anti-immigrant fascists. And Alizadeh started the Moria Corona Awareness Team, a refugee-run group, to help inform his fellow refugees on how to try to avoid coronavirus infections in such a crowded camp.

A privately run passenger ferry has docked on Lesbos to temporarily house some of the refugees displaced by the fires. Two Greek navy ships will also provide shelter.

Meanwhile, islanders are blocking roads around the remains of the former camp to prevent workers from cleaning up the site. They want to make sure it is never rebuilt.

“I don’t know what will be the next plan and what will happen,” Alizadeh says. “But I hope that we go to a place that is not worse than the worst place on Earth.”

Nada Homsi and Lisa Weiner contributed to this report.