Ambulances fill the loading area at Vanderbilt University Medical Center in Nashville. The hospital has tried to adjust to the surge of new infections by dedicating three floors for treatment of COVID-19 patients, and creating two COVID-only intensive care units for the most seriously ill. Still, the hospital has had to deny patient-transfer requests from smaller hospitals. 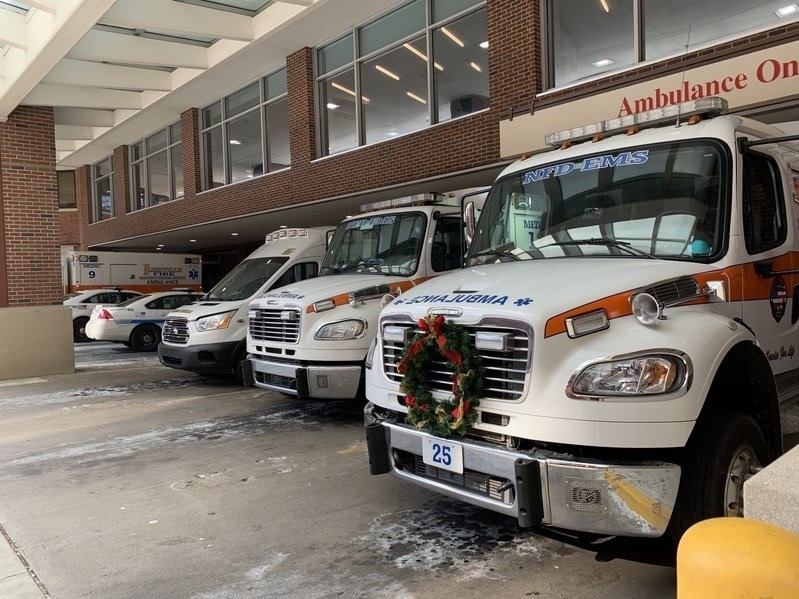 Ambulances fill the loading area at Vanderbilt University Medical Center in Nashville. The hospital has tried to adjust to the surge of new infections by dedicating three floors for treatment of COVID-19 patients, and creating two COVID-only intensive care units for the most seriously ill. Still, the hospital has had to deny patient-transfer requests from smaller hospitals.

COVID-19 is hitting a handful states harder than anywhere else — California, Oklahoma, Texas and Tennessee. And in Tennessee, hospitals are having to improvise, as nearly 3,000 people are hospitalized for COVID-19 and treatment is underway for far more COVID patients than ever thought possible.

Clinicians say they are trying to bend but not break as they wait for vaccines.

“If we have another surge after Christmas and New Year’s like we did after Thanksgiving, it will completely break our hospitals,” Tennessee Health Commissioner Dr. Lisa Piercey said this week.

A couple of Tennessee’s rural hospitals have requested ventilators from the state’s emergency stockpile. A federal emergency team has been sent to the mountainous northeast part of the state. And alternative care sites that were set up months ago, to deal with this kind of patient surge, are empty — rendered useless because there’s no staff to run them.

From outside the hospital walls, it’s impossible to see how serious the situation is. Visitors are largely kept out. Patients aren’t spilling into the street. Ambulances don’t line up around the block.

But inside, hospitals are frantically constructing new COVID units.

Hospitals are forced to adapt and work with existing space

In an effort to avoid treating patients in hallways, emergency departments are doing flash renovations. Last week, in the ER at TriStar Hendersonville, the waiting room was transformed into a patient care area. A small café is now the waiting room.

“We’re already taking measures for the onslaught that we believe is coming,” says Dr. Duane Harrison, the ER medical director. “It is daunting to walk into the emergency room at 6 a.m. and see 13 people and know that there are no beds upstairs — and know that you are waiting for discharges and, unfortunately, deaths. But we keep making a place.”

Harrison says the crowding is not going to be comfortable, but it’s better than the alternative of turning people away.

“You know, we thought we knew where our breaking point was,” says chief nursing officer Robin Steaban.

But VUMC already crossed that threshold, several weeks ago.

“There is a breaking point. We have not discovered that yet, but we know that there is one when it’s going to be impossible to do the kind of care we want to do for patients,” she says.

That’s not to say coping has been pretty.

Dr. Todd Rice directs Vanderbilt’s COVID ICU, and has been fielding calls from as far away as Missouri and Virginia from hospitals with no room for — or no capabilities to treat — complex COVID patients. Rice has to tell other physicians there’s no room at VUMC either, at least not for their transfer patients.

And turning anyone away feels wrong for a major medical center that’s usually thought of as a backstop for the region, he says.

“We want to help them,” Rice says. “And here we’re having to really triage our resources.”

So a strange thing is happening. Even smaller hospitals that would usually refer critical cases to urban medical centers can’t do that and are actually having to accept overflow from out of state.

“It’s pretty unusual for us — or was unusual — to get patients [from out of state]. Now we’re getting them fairly regularly,” says Dr. Matt King, a pulmonary critical care physician at a smaller Tennessee hospital, Sumner Regional Medical Center in Gallatin.

Dr. King handled a patient who was flown in recently from Kentucky, having sought a bed from Ohio to Alabama. And this patient wasn’t even a COVID case.

But COVID is what’s causing the capacity issues. King says many of those patients are hospitalized for weeks.

“It doesn’t take very many patients staying for a week or two weeks for us to fill up,” he says “The hospital really relies on being able to get people in, get them well, and get them home quickly so we can take care of the next person.”

At the bedside, resorting to uncommon measures

Doctors say they are doing things that feel risky, like sending patients home earlier than they typically would, even when they still need supplemental oxygen to breathe.

“Actually right now, I’m signing some paperwork to get a patient home with oxygen,” King admitted during an interview last week.

Hospitals are also telling more people who show up for care to go home, and only come back if things get worse.

“You’ve gotta meet some pretty strict criteria to be admitted to the hospital with COVID-19 right now,” says Dr. James Parnell, president of Tennessee’s chapter of the American Academy of Emergency Medicine.

Hospitals anticipate that they will have to make even more space, because they know additional cases are coming soon — from both the massive ongoing surge in new cases and from all the end-of-year holiday gatherings that will go on, despite the increasingly desperate pleas to stay home from public officials in Tennessee, and beyond.

This story was produced in partnership with Nashville Public Radio and Kaiser Health News.

US intelligence officials have struggled to respond to China's decade-long hacking campaign, finding themselves one step behind China's efforts (Zach Dorfman/Foreign Policy)

Will The New Coronavirus Mutation Affect The Vaccine? Here's What You Need to Know