Satellite imagery captured by Maxar Technologies on Friday appears to show dolphin pens at the entrance to Sevastopol Harbor. The naval base there is important to the Russian military because of its proximity to the Crimean peninsula. 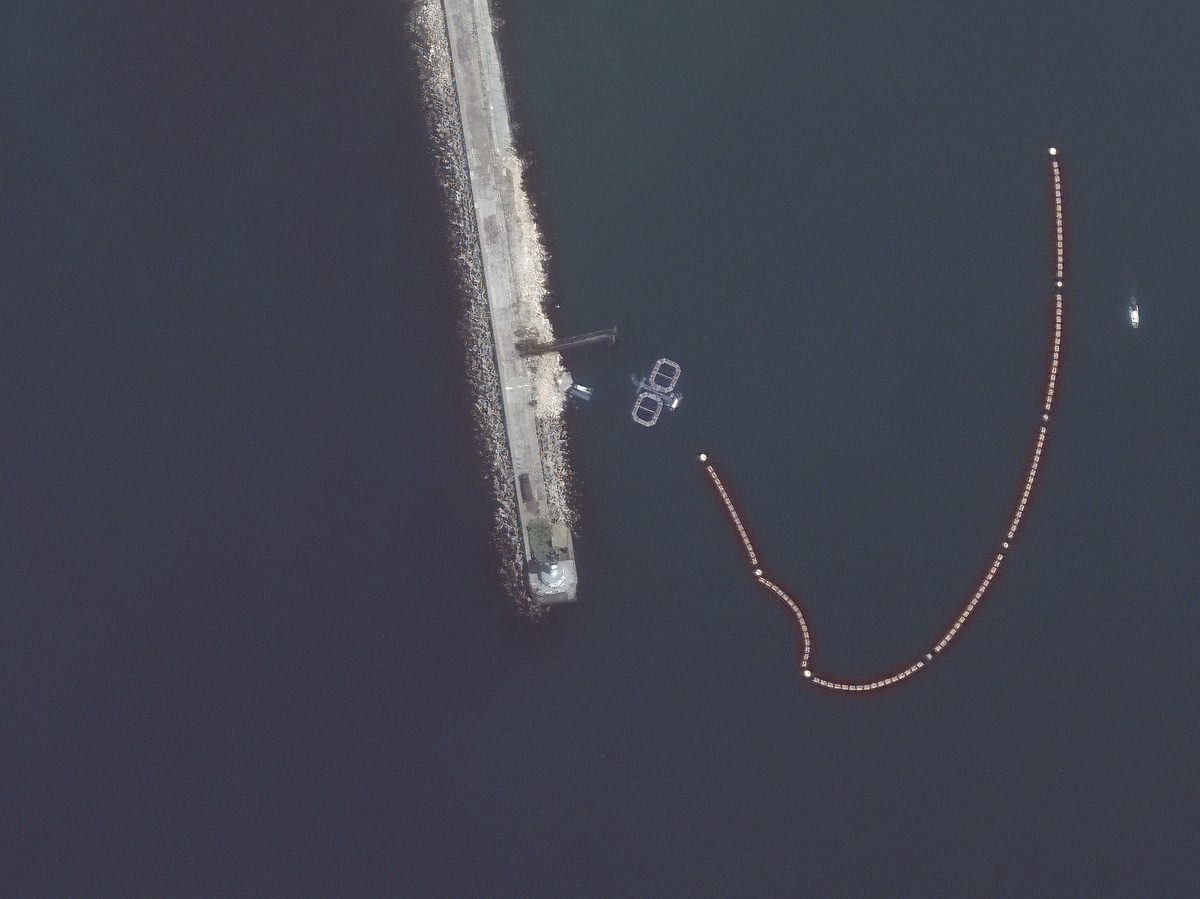 Satellite imagery captured by Maxar Technologies on Friday appears to show dolphin pens at the entrance to Sevastopol Harbor. The naval base there is important to the Russian military because of its proximity to the Crimean peninsula.

Russia’s military is using specially trained dolphins to defend a critical naval base off of Crimea, according to an analysis published by US Naval Institute News.

Submarine analyst H I Sutton wrote in the publication — which is editorially independent from the nonprofit USNI — earlier this week that satellite imagery from Maxar Technologies shows two dolphin pens at the entrance to Sevastopol Harbor, the Russian Navy’s “most significant” naval base in the Black Sea. He said the pens were moved there in February, around the time that Russia launched its full-scale invasion of Ukraine.

The Maxar News Bureau confirmed to NPR that it agrees with that analysis. The firm also provided new satellite images, taken on Friday and showing a closer view of dolphin pens in the water at the entrance to the bay.

Andrew Lambert, a professor of naval history at King’s College London, tells NPR that he isn’t surprised by the use of defense dolphins in the ongoing conflict, since they were in Sevastopol Harbor “long before it started.”

Indeed, the Soviet navy ran several marine mammal programs during the Cold War, including training dolphins near Sevastopol. That particular unit transitioned to the Ukrainian military when the Soviet Union collapsed, Sutton explains, but “barely stayed open” despite attempts to remain operational. Russia took control of the unit after it annexed Crimea in 2014, and expanded the program once again.

“The Ukrainian work that pre-dated the seizure of Crimea was a continuation of existing programmes, and we know the Russians seem to be using other marine mammals, including belugas in the Arctic,” Lambert adds in an email.

And Russia isn’t the only country to do this kind of work with marine mammals. In fact, the U.S. Navy has a history of similar programs, and trains dolphins as well as seals for similar purposes to this day. Here’s a look at why dolphins make good defenders, and which countries rely on them. Dolphins play at the Sevastopol State Oceanarium in Crimea, on March 30, 2014. After Russia annexed Crimea, its military revived a Soviet-era dolphin-training program. 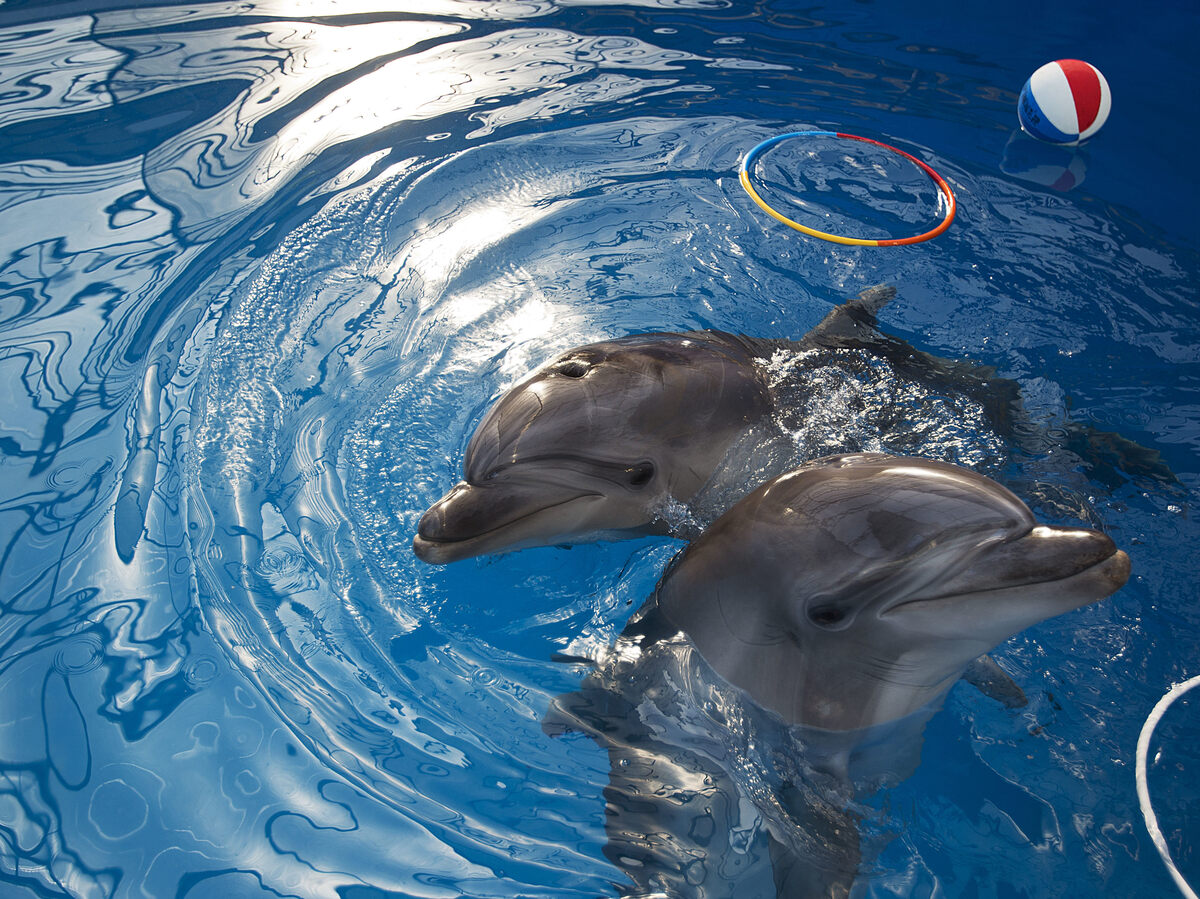 Dolphins play at the Sevastopol State Oceanarium in Crimea, on March 30, 2014. After Russia annexed Crimea, its military revived a Soviet-era dolphin-training program.

Many kinds of animals have been key assets in war, Lambert says, but dolphins are especially well-suited to their underwater duties because they are “fast, agile and brilliantly adapted to hunting and killing underwater.”

“Dolphins would be ideal for killing human divers… fast, clever, and powerful,” he adds. “There is no evidence that they have done this, or are trained to do so, but it is probable. Any diver in the harbour at night would be a target.”

According to Sutton, the dolphins in the Black Sea could be tasked with counter-diver operations, with the aim of preventing Ukrainian special operations forces from infiltrating the harbor underwater and sabotaging the high-value Russian warships there.

Dolphins can also use echolocation — also called sonar — to detect underwater mines. Sam LaGrone, an editor of USNI News, told PRX’s The World that dolphins can detect things that electronic and mechanical systems are unable to find. They’re also less likely to accidentally set off those mines, he added, since they’re nimble in the water and, unlike ships, don’t carry a “magnetic signature” that could detonate one.

He also noted they can swim faster than people and are also more trainable, since they can dive down and back up to the water’s surface quickly without having to deal with decompression sickness like a human diver would.

And dolphins make excellent patrol animals, he said, calling them “kind of like the guard dogs of the sea.” Lambert made a similar comparison, noting powerful dogs are used for security on land.

Still, putting dolphins not only in captivity but on the potential front lines of a conflict raises a slew of ethical questions. Activists have long called on the U.S. to end its dolphin program, calling it “inhumane and outdated.”

Dolphins and other marine mammals have been trained to do this work for decades — even as technology has improved. So why hasn’t that changed?

“Someday it may be possible to complete these missions with underwater drones, but for now technology is no match for the animals,” the Navy says.

And, LaGrone adds, “Sometimes you can’t beat hundreds of thousands of years of evolution.” A trainer calms a U.S. Navy dolphin before it is transported to a boat prior to a training exercise at Naval Base Point Loma in 2007 in San Diego, Calif. The Navy’s Marine Mammal Program was declassified in the 1990s. 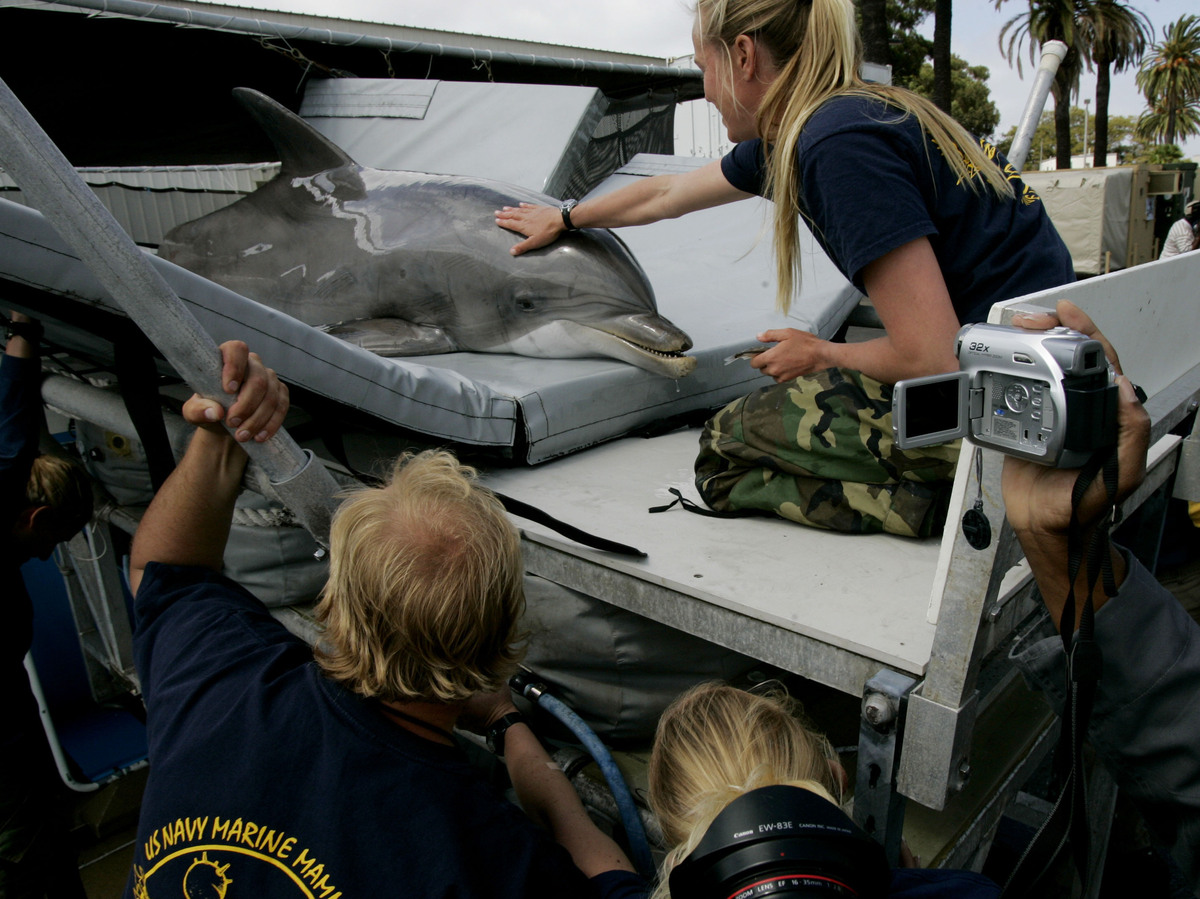 A trainer calms a U.S. Navy dolphin before it is transported to a boat prior to a training exercise at Naval Base Point Loma in 2007 in San Diego, Calif. The Navy’s Marine Mammal Program was declassified in the 1990s.

The use of defense dolphins — and marine mammals more generally — is by no means a new practice.

“They could find the submarines, but got bored,” he adds.

The U.S. established the Navy Marine Mammal Program in 1959. It operates out of San Diego, where it trains bottlenose dolphins and California sea lions to “detect, locate, mark and recover objects in harbors, coastal areas, and at depth in the open sea.”

(The Navy’s program was declassified in the early 1990s, though its website still reminds people not to believe the rumors reinforced in the popular 1973 sci-fi thriller The Day of the Dolphin — in which dolphins are trained as offensive weapons.)

One of the first uses of defensive dolphins was by the U.S. during the Vietnam War. Navy dolphins named Garth, John, Slan, Tinker and Toad were stationed in Cam Ranh Bay, working to prevent enemy swimmers from attacking an ammunition pier, according to the MIT Technology Review. And in 2003, the Navy flew nine dolphins to an Iraqi port on the Person Gulf to identify mines.

Sutton, writing in USNI News earlier this year, identified four countries that currently have marine mammal programs: The U.S., Russia, North Korea and Israel. (Sweden set up a seal-training program in the 1940s.) The ongoing programs primarily use dolphins, he said, but have also involved beluga whales, seals and sea lions.

And all sorts of animals have been accused of being spies, as the BBC reports.

Some of those rumors are based on confirmed training programs: During the Cold War, for example, the CIA spent millions of dollars on a project that would fit listening devices inside cats to pick up Russian intelligence (it ended in failure on the first day, apparently).

Others were more based on hunches. Iranian intelligence operatives “arrested” 14 squirrels, saying they had been caught within the country’s border wearing western spy gear. And in 2013, Egyptian police took a stork into custody on suspicion of spying, because it was fitted with a noticeable tag (that was actually being used by French scientists to track its movements).

The case of Hvaldimir, the beluga whale accused of being a Russian spy

Russia’s marine mammal endeavors have already made headlines in recent years. For one, satellite imagery suggests that its Black Sea dolphins were deployed to a Russian base in Tartus, Syria, for several months in 2018.

And in April 2019, fishermen in Norway spotted a beluga — notable because he had an unusual affection for human attention, and was an usual sight that far south of the Arctic. It turned out to be wearing a harness attached to a camera mount and clip inscribed “Equipment St. Petersburg.”

That immediately led to widespread speculation that the whale was a spy. He was locally named Hvaldimir — a combination of the Russian president’s name and “hval,” the Norwegian word for whale.

In May 2019, The Barents Observer reported that satellite images — identified by Sutton — showed a secret Arctic marine mammal facility belonging to the Russian Navy, with Beluga whales visible in pens.

The BBC reported last year that Norway’s domestic intelligence agency concluded in an investigation that the whale likely came from a Russian research program, though Russia’s military has not addressed its origins. A retired Russian colonel told Reuters he had been informed that the scientists in Russia’s north were “using beluga whales for tasks of civil information gathering, rather than military tasks.”

According to OneWhale, a nonprofit established specifically to protect Hvaldimir, the whale has spent the majority of his time at industrial salmon farms, which is both a workplace hazard and environmental liability.

It adds that his affinity for humans and celebrity spy status have also made him a target of dangerous “unregulated tourism,” and he has suffered injuries from boat propellers, fishing hooks and other sharp objects. The organization aims to relocate Hvaldimir to “his own safe fjord” and create a protected nature reserve for him and other whales needing refuge, before potentially releasing them back into the wild.

At an all-hands early Friday, CEO Parag Agrawal acknowledged Twitter was vulnerable to a takeover because it had underachieved as staff asked if Musk is serious (Casey Newton/Platformer)